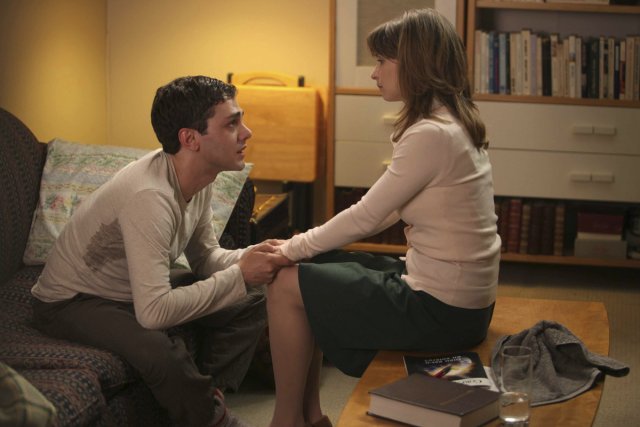 Directed by Podz and written by Gabriel Sabourin, Miraculum explores the lives of eight people as they struggle with life-changing decisions: a couple who are Jehovah’s witnesses approaching marriage (Xavier Dolan and Marilyn Castonguay), two feuding brothers (Gabriel Sabourin and Jean-Nicholas Verrault), two sexagenarian co-workers in love (Louise Turcot and Julien Poulin) and a vice-ridden wealthy couple (Robin Aubert and Anne Dorval). If their personal struggles weren’t enough, a plane crash is thrown into the mix.

Through dueling timelines and intertwined plots, the film follows each situation, giving no answers to the hard questions.

I sat down with Podz earlier this week to chat about the film, its heavy themes and the all-star cast.

Kayla Marie Hillier: How did you come across Gabriel Sabourin’s script?
Podz: Pierre Even, the producer, called me up and said, “I have something for you, I think you’d like it.” He sent it over and I said, “Yeah, I want to do this.” I knew Gabriel before, we’d talked about doing something together. I’d directed him in a few things, so I knew of his work and I knew he’d written a few plays — I’d seen the plays, so I knew what he was about.

KMH: What appealed to you about the script?
Podz: What I liked about the script was what I want people to take away from it. It’s a film about the decisions we make at crucial moments in our lives. They’re all faced with life-changing decisions — whatever they’ve constructed before won’t be there anymore. That interested me. It wasn’t over the top, it wasn’t a big thing, you don’t have characters telling you what they’re feeling — it was just people living simple lives and through it all you have these big themes coming out. I thought it was an interesting approach.

KMH: The film has so many overlapping stories and themes, religion, medical ethics, love etc. — is there one in particular that you warmed to more than the others? A certain thread to this story that you favoured in some way?
Podz: No actually, I like them all. I was worried that the story about the alcoholic woman and her husband at the casino would be flatter than the others because they’re more moody. But I really liked the idea. I thought they were all very interesting and very human — which I like. Everything I do is based on humanity, different subjects, but at the base of it, it’s always about “Why are we here? How do we deal with being here?”

KMH: Do you have any concerns that regardless of the research you’ve done, that the Jehovah’s witness community will dispute your representation of their faith?
Podz: It could happen, it probably will. That’s okay, that’s fine. I think from my perspective I tried to be really fair and honest. I’m very comfortable with their portrayal. The questions we pose of them are legitimate questions.

KMH: The film reminded me a bit of Paul Haggis’s flick from 2004, Crash, just less Hollywood and as you said, much more human. Did that similarity cross your mind?
Podz: I have a long memory of films because I’ve seen a lot, so it’s all there in my DNA now — so of course when I read it I thought, “It’s kind of like this, it’s kind of like that,” but what appealed to me with this film is that there’s two timelines. So there’s a present timeline and three past timelines — and how they interconnect without you being aware of it too much. I didn’t want to hit people over the head with this kind of formal approach. I wanted people to be at the end and go, “Okay, that’s what it is.” I didn’t want them to be aware of the process.

That was tricky. In the beginning you have to put all these puzzle pieces out there and then they have to come together without you really realizing that they are coming together. And hope that the audience follows you through that.

KMH: What’s next for you after this film?
Podz: I’m doing 19-2, the French version… the correct version. I’m doing the third season, we’re shooting in the fall. And until then, I’ve started writing some stuff for me and also there’s a movie I’m planning for June which is one shot for 80 minutes. ■

Miraculum opens Les Rendez-Vous du Cinéma Québécois at the Imperial Theatre (1432 Bleury), tonight, Feb. 20 at 7 p.m. (by invitation only). It’ll also be screening on Thursday, Feb. 27 at the fest and it opens in theatres Feb. 28.