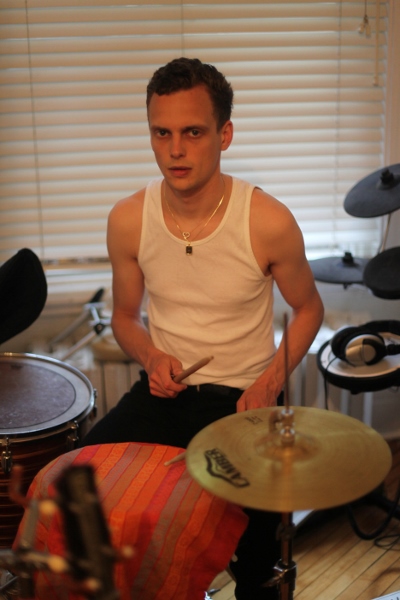 You may remember Alden Penner as one third of the beloved but short-lived local band the Unicorns, or from his more recent band Clues. It was during the lifespan of that band that Penner started writing songs that felt separate from Clues, and a new course became apparent.

In 2011, Penner released a solo EP called Odes to the House, a bare-bones set of folk songs, crafted only with guitar and voice. Another EP, Precession, followed at the end of 2013, and while it’s clearly the work of the same songwriter and singer, its arrangements and production are fuller and more adventurous.

All four of its songs appear on Penner’s new LP Exegesis, released digitally last Tuesday (there are no plans for physical formats at the moment but CDRs may be sold at shows). For the launch at Cagibi this Friday, he’ll be joined on stage by the record’s coproducer Laura Crapo (aka Laura Borealis) and perhaps another guest or two.

When I contacted Penner a couple of weeks ago, our conversation turned to the lyrics on Exegesis, and the way he incorporated words written by another Alden — Canadian poet Alden Nowlan — into his verses.

Lorraine Carpenter: So why Alden Nowlan?
Alden Penner: In the last year, I picked up a collection of Alden Nowlan’s poetry, Bread Wine and Salt, just out of intrigue ’cause not many people have the same name as me. I’d known his name for a while and he was a legitimate literary figure, but it was the first time that I really sat down and connected with his poetry.

Another poem that I’m using is one by the Palestinian national poet Mahmoud Darwish. Interestingly I found out just this week that both these poems are from 1967. I feel like there’s a particular energy in music and culture from that time that speaks to me, and even though I wasn’t conscious of that, it just appealed to me, whatever wavelength they were tuning in to, even though they’re talking about somewhat different aspects of reality.

LC: The band AroarA used poetry by Alice Notley on their record In the Pines, and because that was so recent and they’re local, it’s the first thing that came to mind when I read about your record. There’s got to be more precedent than that though.

AP: In the greater context of history, poetry has often been made into music. Great classical composers have done so with large bodies of text —this was the place for poetry, it was in music. That was how it was meant to be heard. Certainly in Persian music, a lot of their greatest poets, like Hafez and the great mystic poets, are often found in their traditional music as well.

Even with my own writing, this isn’t anything that new. I decided to point it out in promoting the album just because I’m using a lot more of the text than I usually do. I mean even in Clues, and to some degree in the Unicorns, I did borrow phrases here and there but it was more sampling rather than using as pure an amount of the text as possible.

LC: In cases when you’ve used someone else’s words, is it because they were particularly relevant to you, intellectually or emotionally?
AP: Often when I’ve had…not had a lack of inspiration, but in terms of writing my own lyrics, that reaches a certain threshold and I turn to others’ work, mainly out of personal interest. Those are nice poems and I like to memorize them and have them at hand. I have far less time to read now that I’m focusing on making songs and trying to put some shows together over the next year, so it’ll be handy to have an internal library of decent poems to refer to. ■