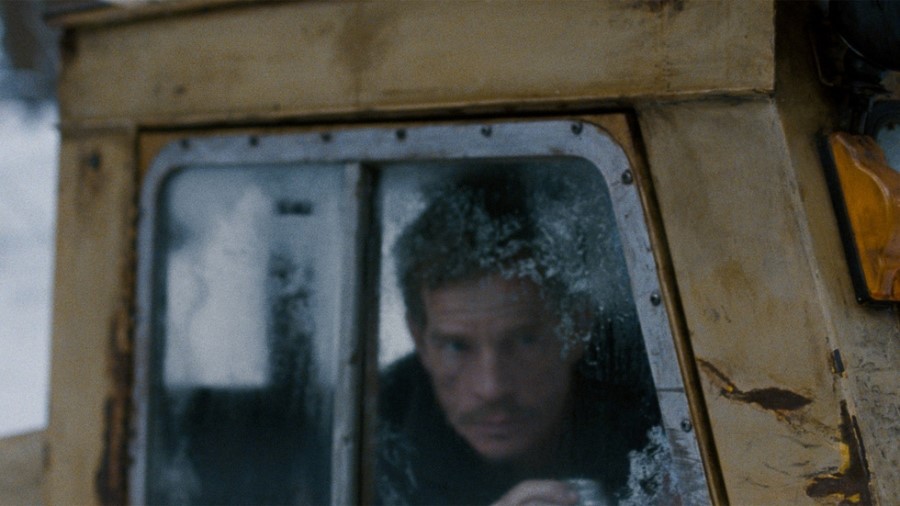 Local director Emanuel Hoss-Desmarais’s first feature-length film, Whitewash, has been raking in a few awards and nominations on its way to today’s theatrical release, including Best New Narrative Director at last year’s Tribeca Film Festival and most recently, the Director’s Guild of Canada’s Claude Jutra Award.

The film is about a snowplow operator (Thomas Haden Church) in Northern Quebec who plows into (pun-intended) a man and kills him on a blustery, snowy evening. He flees the scene, driving his machine into the woods, only to wake up the next morning to discover he’s in a pretty dire and isolated situation.

The film strikes a balance between the severity of the situation but also the comedy of the whole thing. Marc Labrèche is phenomenal as the ridiculous and yet sinister snowplow victim.

I got the opportunity to speak to Hoss-Desmarais and Thomas Haden Church earlier this week about the film and its cold conditions.

Kayla Marie Hillier: You co-wrote Whitewash with your long-time collaborator Marc Tulin. How did you meet?
Emanuel Hoss-Desmarais: We met in summer camp, we were teenagers. We’ve been friends for at least 20-something years. It’s the great thing about working with a friend, being able to say whatever comes to mind, no white gloves, to just really talk as friends and make the best story. So it’s definitely a collaborative process.

KMH: How’d you come up with the idea for the film?
EHD: It was a crazy flash at first of a man getting hit by a snowplow and the operator fleeing the scene of the crime in small-town Quebec, in the middle of winter, in a storm — having to flee the scene of the crime. Then it just evolved beyond the flash. We had to find a story behind that. It was kind of interesting for us to discover what the decay of the human mind can be when it’s faced with solitude and obviously guilt. It was playing with how someone can be the judge of their own crime, by themselves. So we were playing with that idea.

KMH: What appealed to you about the script when you first received it? What made you decide to take the role?
Thomas Haden Church: It was really about the isolation, emotionally and then obviously physically, that the character is sort of hurled into. When you meet him, you don’t understand what the setting is and then something really traumatic happens. The story for the most part is told in retrograde, but what really appealed to me is that the circumstances at the beginning could easily happen to anyone. It looks like this guy is just doing his job and something happens, it frightens him. He doesn’t know how to handle it, so he decides to split and makes the situation worse by ending up in such a remote area with no fuel and the machine [snowplow] is stuck.

KMH: Did the weather conditions help you in some ways to get deeper into the role?
THC: Absolutely.
KMH: I also found that it lent itself to the humour throughout the film. For instance, when your character Bruce is lugging three cans of gasoline through the snow back to the broken down plow.
THC: It is ridiculous. That scene with the scarf, smoking the cigarette, carrying all the jugs of fuel — it took on a whole other element. The temperature really came up and suddenly I was sweating, the scarf was choking me, I was trying to smoke a cigarette, there was no wind. There was no breeze at all. I was carrying these jugs and I insisted that the jugs not be full, but full enough that I had to really struggle to carry them. It really became an irritating sequence — it was real and that kind of played into the comedy of him getting so upset, throwing the cans.

KMH: What was it like working with Emanuel?
THC: Wonderful. I always, if the circumstances present themselves, like to work with first-time directors that wrote the script. Because they took two or three years writing it, I would ask him a question and he would say, “It’s a good question, Marc and I discussed that.”

KMH: What’s next for you, Emanuel and Marc Tulin?
EHD: I have this comedy with Marc that we’re in the process of trying to get financed right now called Birthmarked. We’re also stemming a new project that’s the beginning of an idea and we have to figure out which direction to take it. But at the same time, I’m also getting some great scripts on the American side — the prize in Tribeca helped me land a few deals with some agents in the U.S., so I’m getting some interesting projects from there as well. ■