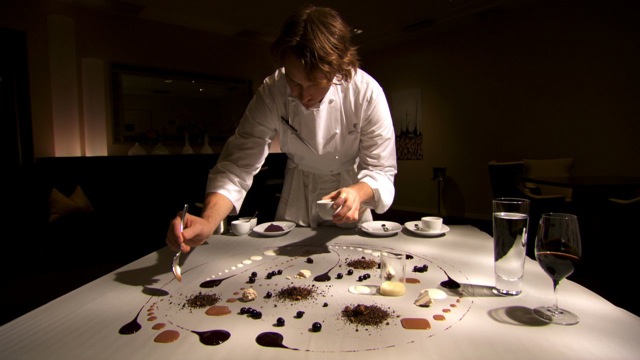 Joseph Levy’s documentary Spinning Plates is indeed a feast. Don’t watch it on an empty stomach, as I did, or you’ll be craving homemade tacos, crispy fried chicken and delicious illusionary concoctions before it’s over.

Levy, who is best known for his role as producer on the highest-grossing short of all time, George Lucas in Love, makes his feature directorial debut with this exploration of food proprietors.

The film focuses on three restaurants: Chicago’s Alinea, owned by world renowned chef Grant Achatz, who is a leader in molecular gastronomy; Balltown, IA’s Breitbach’s Country Dining, owned and operated by the Breitbach family since 1852; and a small Mexican restaurant in Tucson, AZ, la Cocina de Gabby, operated by the Martinez family.

Each restaurant caters to a different audience: Alinea is fine-dining, topping restaurant lists the world over. Breitbach’s is as much a community centre as it is a restaurant — it’s Balltown’s main attraction. And la Cocina de Gabby is an entrepreneurial dream and the Martinezes’ only opportunity to make money in order to avoid foreclosure.

Through these tough times, and how each workplace/family faces them, the dining experience is stripped back to its basics. We uncover how these unique eateries are ultimately the same, and as Levy suggests, it’s not what you cook — it’s why you cook it.

Spinning Plates gets to the heart of a meal: the ritual, the entertainment. It suggests that food isn’t merely our necessary fuel — that eating is a sensory experience, steeped in history and best enjoyed with others. It reminds you, in a world of foodie pretension, of the simple joy of eating. ■