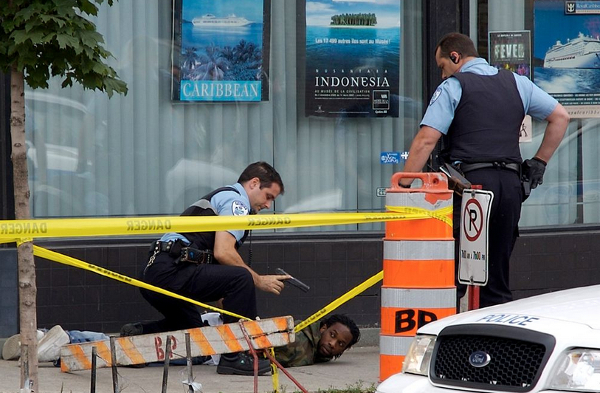 “Justice should not only be done, but should manifestly and undoubtedly be seen to be done.” —Former British Chief Justice Lord Gordon Hewart

Montreal police have been publicly embarrassed by two recent videos, one showing an officer threatening to tie a homeless man to a pole, and another capturing an officer punching a young man in a McDonald’s restaurant.

Interestingly, the incidents seem to be pushing Montreal police to take a serious look at doing some videotaping of their own. SPVM spokesman Ian Lafrenière told several media outlets on Tuesday that the force was looking at equipping officers with lapel-mounted cameras that would provide a more complete picture of such incidents in the future.

They wouldn’t be alone. Calgary police recently conducted a pilot project involving 50 cameras and decided last summer to extend the program and make it permanent. Other Canadian cities exploring the possibility include Victoria, Edmonton, Calgary, Ottawa and Amherstburg, ON.

SPVM brass wouldn’t even need to get the police brotherhood on board, since the union was already advocating uniform-mounted cameras last spring.

Yes, the Fraternité des policiers et policières de Montréal, not exactly famous for its love of transparency, thinks cameras will reduce the number of violent confrontations involving its members.

That was apparently the case for the 66-officer police force in Rialto, CA,where in the first year of their camera program, use of force by officers fell 60 per cent and complaints against officers fell by 88 per cent.

The reason why is fairly evident: when they know they’re being recorded, both cops and citizens are going to be on their best behaviour. And when they aren’t, video evidence will put a quick end to the game of he-said, she-said.

One of the arguments against the use of cameras by police is a concern over privacy rights. But even the American Civil Liberties Union thinks those rights can be protected.

“Cameras hold real promise for making it easier to resolve complaints against police,” Peter Bibring, a lawyer with the ACLU of Southern California, told the New York Times. “They do raise privacy concerns, but ones that can be addressed by strong privacy policies.”

The other argument is cost. With some heavy-duty, tamper-proof, uniform-mounted versions coming in at $400 to $900 a pop, outfitting Montreal’s 4,500 officers could be expensive. (The city doesn’t need to buy a camera for each officer — just enough to cover the number of cops out on patrol.)

That seems like a small price to pay if it results in a significant decrease in violence, both by and against police. Cameras would also cut the number of cases clogging the court system by making it harder to lie about what happened during an altercation.

Cameras would also curtail the number of questionable arrests for crimes such as obstruction of justice and disturbing the peace, which all too often mask the non-crime of  “disturbing the police.”

Of course, a camera program won’t be effective without some strict rules. Ordering cops to turn the cameras on throughout their shift would be excessive, but they should be required to turn them on during any interactions with the public. There should also be serious penalties for officers who turn off or obstruct their cameras.

The recordings should also be uploaded instantaneously to secure cloud servers to prevent tampering or attempts to destroy them, and they should be kept for at least five years.

Would Fredy Villanueva be alive today if Constable Jean-Loup Lapointe had been wearing a camera? We’ll never know, but you can be certain that the events would have unfolded differently — and video evidence would have curtailed the long and expensive coroner’s inquest that followed.

In science, the term “Hawthorne effect” is used to describe the fact that the behaviour of the subjects in any study will often change merely because they know they are being observed. Although it’s often a short-term change, that’s because the experiment itself is usually short-term.

Using uniform-mounted cameras could produce some long-term changes, however, as police and the public learn that cameras are always candid. ■