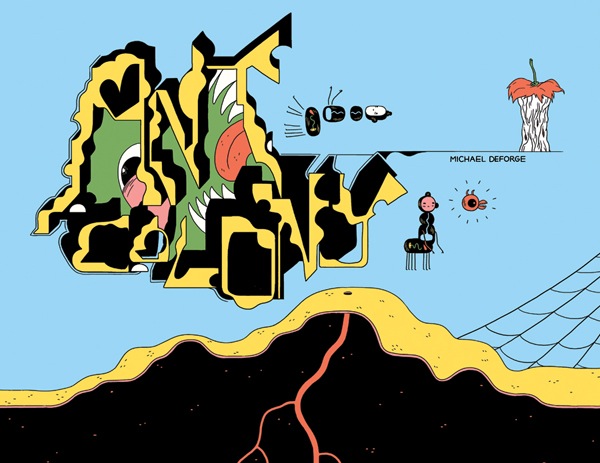 Drawn & Quarterly collects DeForge’s web comic into a much-anticipated hardbound graphic novel, the first for the young, mostly self-taught artist already being touted as the best of his generation. 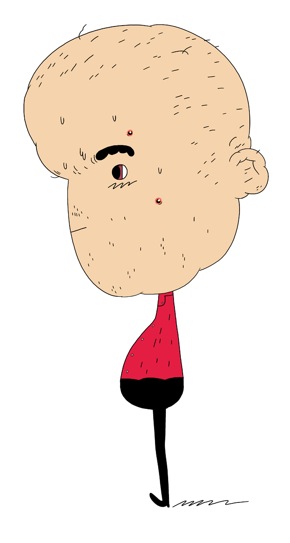 “The first strip, I did for a zine without a narrative in mind,” DeForge explains. “It came out of doodling these ants, and then wanting to write a strip about one existential ant who’s trying to be a bit more aware and able to see the edges of the world they live in. I just thought that was sort of an okay gag, and then when I realized that I wanted to spend more time with the world, I ended up unpacking that thing and writing more to that couple, and more to those characters.”

Casting another species in the tale gives DeForge the distance to study the gory entrails of civil society under a microscope, dotting the ants’ speculations with “fake science,” biological tidbits that may or may not be true. This remove makes it easier to find humour in horror, making light of the absurdity of life itself.

Coming up through the zine and rock poster scenes, DeForge passed on art school, instead steeping himself in comics, manga and graphic design. This gambit’s paid off — DeForge plumbs a deep toolbox of visual references as he dips in and out of different characters’ lives to frame longer arcs of the colony’s story, switching up styles with each pass. Cute but menacing bugs morph into abstract geometric planes, his stark line work framing a bright, anxious palette of acid greens and sweet hot pinks.

“A lot of the choices just end up being kind of intuitive,” he says of Ant Colony’s progression, adding that the volume’s distinctive frenetic colouration was the result of a kind of personal challenge, “to give each sort of episode its own colour scheme.

“I was doing it all at once. I sort of improvise all my comics. As I draw them, a lot of choices just make sense as I’m scripting it out. Or it just makes sense as I draw a character and think, oh, he has this kind of personality and this is what his arc is going to probably be.”

The hyper-prolific Toronto comic artist also puts out his long-running series Lose (also getting the archival anthology treatment this spring), works as a designer on Cartoon Network’s Adventure Time and still produces an endless stream of excellent short work online and in collaborative zines with like-minded comic-drawing friends. He hasn’t allowed the exuberant critical reception of his work to mess with his productivity, though, if anything adding more projects to the pile.

As for the “best artist of his generation” thing? “While it’s nice to hear, I don’t really think about it,” he says. “Of course it’s flattering, but it’s not really true.” ■ 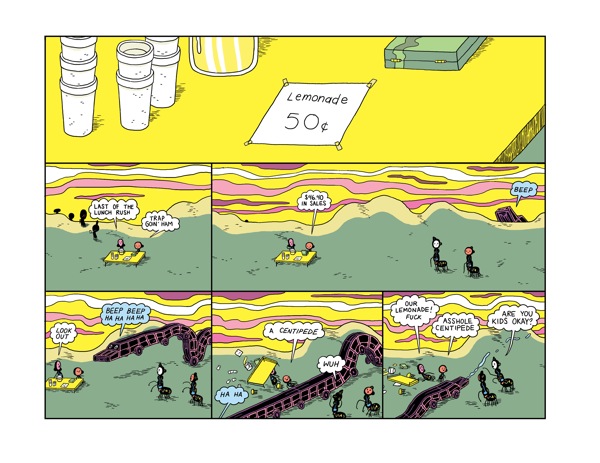