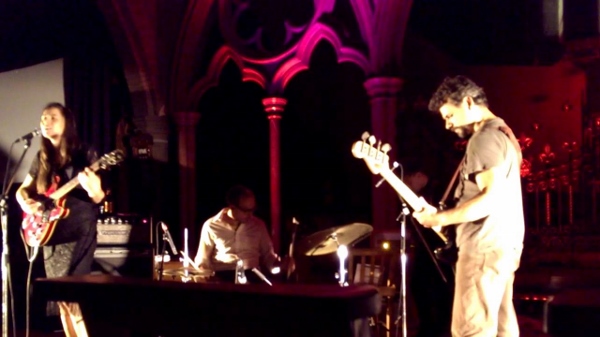 When Montreal duo Maica Mia released their debut record, Sparcity Blues, a year ago, I was waking the neighbours with unbridled exuberance. This was a majestic glacial slab of dirgy slowcore of the highest order, sent home with the sweet croon of singer Maica Armata’s disembodied voice hovering over the gloriously gooey ooze. Shortly thereafter, I approached Armata at the local establishment where she slings suds (Casa del Popolo) and started talking a blue streak about how her band was the best thing since slowcore’s heyday in the early ’90s. As I blathered on about how her band was the redheaded stepchild of Come, Mazzy Star, Swans, Codeine and others, she just gazed at me slackjawed.

“I’m actually pretty embarrassed that I don’t know that much about modern bands. Because I work in a bar and play in a band, I actually enjoy not listening to music a lot of the time,” she explains over the phone. “I didn’t even know who Mazzy Star was until somebody recently mentioned that we kind of sounded like them — I’ve still never heard them, though. When I started playing in front of people, it was during the bluegrass open mic nights down at Barfly, and that was probably my biggest influence. The rest of the musicians would just leave the stage when I got up because I would just play all of the songs really, really slow. Playing songs really slow just felt natural for me.”

Their sophomore record, Des Era, takes all of the hints of the first record and transforms them into a far more cohesive and dense way with great hypnotic effect. Their cinematic scope and panoramic feel is only more sharpened while songs and snatches of musical moments are free to wander where they may.

“This record was really about keeping going as a band and wanting to put together a band that we thought was dope,” says drummer, sampler and producer Jonny Paradise. (Casa del Popolo/Sala Rossa proprietor and Godspeed You! Black Emperor member Mauro Pezzente plays bass for the band in studio and sometimes on stage.)

“The first record was just about documenting these songs I had, while this new record has a lot more collaboration from Jonny,” adds Armata. “He would play something that I thought was pretty on the sampler, or I would come up with something he liked, and we would just run with that,” says Armata.

With the current crop of shoegazers bloating the blogs with their lumbering bpms and dirgy drones, it seem like Maica Mia should have no problem rising to the top of the heap, but Armata and Paradise insist they’re in no rush to become indie rock darlings. Like Maica Mia’s debut, Des Era was pressed DIY, in limited quantities, on God’s favourite format: vinyl.

“From the beginning of making this record, we just knew we wanted to do this ourselves,” says Paradise. “We’re just taking our time figuring out if we even want to approach somebody, and to avoid a feeling of being trapped.”

“It feels good to put it out ourselves because in some ways this seems like our first record, because this is really more ‘our’ record,” adds Armata. “I think it’s important to craft your own aesthetic first. It felt like something we could do on our own and keep full control of, and just be able to say, ‘We did this’.” ■