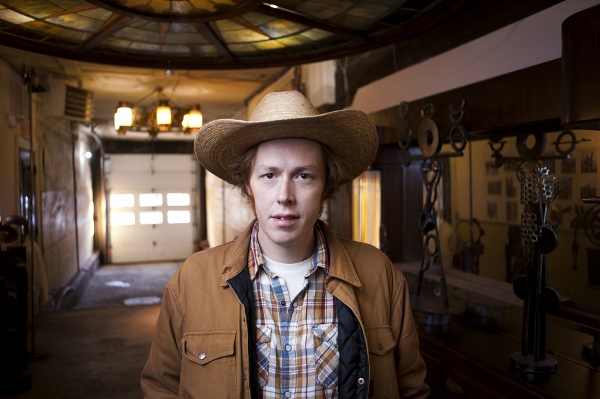 Andy McLelland occasionally seems distracted during our chat at one of the Plateau’s beloved cafés. We are, after all, surrounded by everything  he’s distanced himself from: the loud, overproduced music, the glowing screens of phones, tablets and laptops.

He sometimes stops mid-sentence and looks around, as if to try and relate to his surroundings. “I find other stuff sounds like they sandwiched a whole bunch of great sounds together and it all comes out at the same volume,” he says, mimicking a tiny waveform with his hands. “The thing about songs that are sandwiched together is that they sound a lot better in an environment like this.”

The man had stayed off of Facebook until recently, changing his mind after he felt invisible to friends and colleagues. “It doesn’t take very long for me in front of a computer to feel wired, to feel like my whole nervous system is inside there. The more music I listen to, the more I get the feeling it was made inside of a computer. And there’s no texture to it. I think it makes our lives flatter,” he says.

Li’l Andy’s wordy musings and barebones take on roots music seem like an oddity in a world of overindulgence, 140-character statements and ADD culture. But he’s neither posturing nor a passive bystander. His music is a construction of our time. His obsession with the past mirrors our growing dehumanization. In that sense, his new record, While the Engines Burn, which chronicles the arrival of the railroad in rural Canada in the early 1900s, is very much a continuation of 2010’s All Who Thirst Come to the Waters, a gospel record about martyrs and unconditional piety, recorded in the Église Saint-Jean Baptiste. Here, tales of quaint lives shaken by industrial development have replaced those of saints and sinners, but it’s all saying the same thing: “We’re willing to make concessions in a way that almost all of our ancestors would think is crazy. They took stock in beliefs that they held much higher. Whereas ours only seem to be in the economy.”

LOCO MOTIVES
“It was really just like being obsessed with trains”, McLelland says of the new batch. “Another vein that runs through country music is train songs. […] You listen to all those old country songs about lonesome whistles blowing, or about a train that a prisoner hears… You realize that that kind of technology transformed what it was to live in the territory that’s North America. It created cities, it created a kind of loneliness, because for the first time people could be somewhere and hear something moving. And it made people realize that there were other places than where they were.

“But you don’t hear much critical talk about that technology in that music at all”, he adds. “You don’t hear people talking about the train cutting up the country, creating a whole bunch of waste and smoke. It the 1800s, it was pretty common in the Prairies for sparks to fly off the train and burn down like 20 acres of hay. But still, it was progress, right? It made me think of the darker underbelly of that great big story of how the train built Canada and linked it from sea to sea.”

The album’s narrative was also partly inspired by a collection of old postcards amassed by the artist while touring. “All those old postcards have so many scenes of the things that were important to people in the early 20th century in Canada. Like railway depots,” he explains. “They kind of started to make their own story.”

“I think the first World War really blew everything up and got people disillusioned in science and technology. It was the first time all this progress was used all together and it turned out to be just as brutal as what came before. [But] in that era of postcards and history that came right before, there you have a postcard of a hydro dam. Not beautiful scenes, but industrial development!”

The album reverberates with echoes of Neil Young’s rockier moments. Given his gig cohosting CKUT’s Country Classics Hour, McLelland’s knowledge of the country universe could have easily inspired him to reference twangier musicians, yet he keeps looking to Canada’s muttonchopped crusader as a beacon of authenticity.

“The way he recorded his best albums is for me the only way that kind of makes sense now,” he explains. “Because when you go in a studio now, you’re presented with all these different ways to make your music more perfect and polished. I don’t see how other people don’t think it works against them. You always have to be on guard to leave in mistakes and do something in a rougher, rawer way than you’re supposed to, by the industry standards. And that’s what he was really doing in the ’70s.” ■