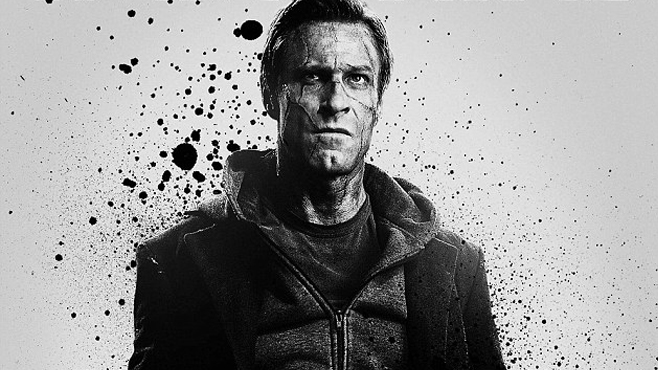 Aaron Eckhart in I, Frankenstein

January is typically the month in which studios dump the unsalvageable stuff: the bad ideas, the contractual obligations, the rocky productions, the bungled sequels, poorly-testing potential franchises and attempts to reboot a 200-year-old Gothic novel as a sexy martial arts sci-fi extravaganza.

Stuart Beattie’s I, Frankenstein may be based on a graphic novel by Kevin Grevioux, but it’s more rooted in the idea that if you rip off tons of movies a little bit, you might be able to convince audiences you’re doing something new. A confused hodgepodge of elements from films as varied as The Matrix, 300, The Lord of the Rings and the Nolan Batman movies (although the films it most resembles are those little-loved boondoggles of years past, Van Helsing and Underworld), this glumly robotic action movie bores at every turn of its 93 minutes of grey-blue chaos.

Unbeknownst to humans, gargoyles and demons have been waging a century-old war right here on Earth. Naberius (Bill Nighy), the Demon Prince, has spent the whole time trying to track down a mythical monster made from parts of dead people, hoping that by uncovering his secret he can apply the technology to the thousands of dead bodies he’s stockpiling to replenish his demon army. With the help of scientist Terra (who thinks she’s simply helping a kooky millionaire), he attempts to devise a scientific way of resuscitating the dead. Little does he know that said nigh-invincible monster, Adam (Aaron Eckhart), has already been found by the queen of the gargoyles (Miranda Otto in exposition-delivery mode) and is well aware of his lot in life. Adam finds himself caught in the middle of the bloody battle, protecting Dr. Frankenstein’s precious diary and remaining perennially unsure which side to take and whose ass to kick (he manages to compromise and kick everyone’s ass).

It’s a fundamentally silly idea, so there’s no point in dwelling on absurd things like the monster’s incongruous first name or the scene where he run-punches a gargoyle in the head in slow motion; these are the things I expect from a gritty reboot of a centenarian property from the guy who wrote the first G.I. Joe movie. What I don’t expect is to spend most of the movie mired in the poorly-written geopolitical bullshit that opposes the gargoyles to the demons. It’s never a good sign when the titular character drops out of the movie for sizeable chunks so that a guy in a centurion outfit and another guy wearing a rubber mask castoff from the Power Rangers movie can spit exposition at each other in between two hacks of an axe. Even at a trim 93 minutes, that manages to dispatch a significant character every seven minutes or so, I, Frankenstein is spectacularly uninvolving.

This would all be forgivable if I, Frankenstein had a sense of fun to it, but instead it aims for grim profundity through Eckhart’s monotone rasp and barrage of CGI-slicked earth tones. There are no one-liners (Adam’s not the quippy kind of hero, more the “groaning in doorways” type), no jokes to speak of and no self-awareness. Yet it remains irrevocably a movie about Adam Frankenstein, immortal hoodie-wearing, stick-fighting monster.

I can’t say that I’m disappointed, exactly, because it’s hard to imagine a movie like this really exploiting its potential, but a sexy Frankenstein.com reboot could’ve been about just about anything. It could’ve gone a million ways — and it chose to go this way. It’s too easy to compare its scattershot, culled-together nature to the collection of disparate body parts that make up its protagonist, but fuck it. If I, Frankenstein wants to take the easy way out, so will I. ■

We spoke to programmer Lucas Jacques about the peculiar magic of the annual dance party series.

The belated sequel to the super-sized action franchise loses Michael Bay but finds more to chew on than you might expect.