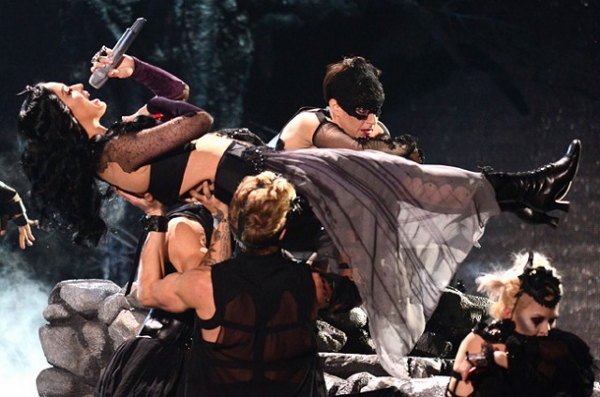 Katy Perry and her supporters

The annual celebration of money-making, payola-promoted music that is the Grammys went down last night with what we’ve come to expect from music award shows: a sensory assault of overblown staging and overproduced sounds performed by grotesque Barbies and Kens. I’m going to give Beyoncé and Jay Z a pass here, and not out of white guilt: their performance wasn’t amazing, but they’re a likeable pair who make half-decent music, and seeing them at the top of the show reveals a concession on the part of the Grammys that they are the music world’s star couple. Jay Z may be more mogul than musician these days (though he’s no slouch on the showmanship front, given what I’ve heard about his greatest-hits show in Montreal last week), but she’s obviously this generation’s Madonna, with a better voice. More on that in a sec.

If only hip hop, R&B and all things “urban” (ie. black) had been better represented throughout the show. Kendrick Lamar was stripped of some cred as his track was buried under the blaring anthemic pap of Imagine Dragons, in a number that decked the stage in white light, white clothes stained with, I dunno, blood?, giant drums and massive emissions of white smoke. Nile Rodgers, Pharrell Williams and Stevie Wonder did a fine job and actually appeared to be having fun, but they were there flanking the number’s faceless stars, Daft Punk, who walked away with the big award for their weak-ass ’70s-AM radio record, Random Access Memories — “Get Lucky” is undoubtedly catchy, but so is C-difficile, and both may induce liquid-beige shits.

Then there was a typically grotesque display by singing blow-up doll Katy Perry, channelling decades of goth cheese in a witch’s amusement park. Metallica tried to class up “One” with a pianist and still came off looking like jerks. Pink reprised her trapeze gimmick from a previous Grammys show, wherein she sang her tune while suspended upsidedown, this time with the reverse bonus of ending the number in duet with the dude from Fun.

But perhaps most awkward was Madonna’s cameo during a track by those hipster bellboy clowns Macklemore & Ryan Lewis. That would have been enough of an indignity, but she sang one of her better ’80s hits in a voice as thin and tired as the skin stretched over her face. How she’s resisting the call of Vegas is beyond me. She’s even dressing like Celine now, with a cane that had my husband wondering if it was more than a mere pimpy affectation.

But Madonna was only (figuratively) the frosting on a giant wedding cake, wheeled out as Queen Latifah officiated a mass wedding ceremony, uniting 33 gay and straight couples in matrimony right there on stage. Because you want to remember your nuptials as part of a Macklemore song at the centre of a celebration of the music industry’s slow, painful and public death.

Sure, between the glaringly awful music and theatre and lengthy stretches of dull performances and boring spiel by poorly scripted presenters and the puzzling choice of host, LL Cool J, were moments of taste and quality. I can’t fault Lorde. And Kacey Musgraves, who, despite being a country singer from Nashville who dresses like a tarted up tea cozy, performed a cute tune with lyrics advocating gay sex and pot. That was a surprise. But there’s no reason why this show needed to overshoot the three-hour mark. Did we need a lifetime achievement award for the Beatles, the most successful, massively marketed band of all time? Did we need a Ringo solo performance and a “Beatles” performance? (Both were pretty painful to watch.) And why did a late Everly brother get an extended tribute when all Lou Reed got was a recitation of one verse of “Walk on the Wild Side” by Jared Leto?

Ultimately, whether or not the performers and award recipients are bottom-of-the-barrel hacks, these corporate music awards are meaningless to most people. Someone who won a Grammy a few years ago recently told me that more people watch individual episodes of American Idol than the Grammys, so it doesn’t even spread the word about your band as effectively as one might think. (And honestly, that was Arcade Fire’s weakest album, bro.) ■