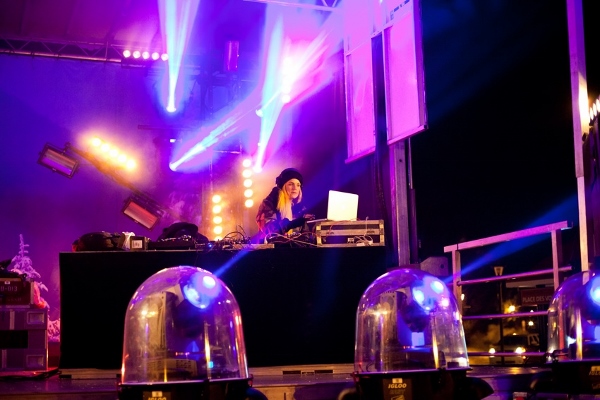 Although a cool festival in a winter wonderland seemed like a slam dunk, Mont Tremblant’s first­-ever electronic music après-­ski came and went rather inauspiciously this week.

Chalk up ElectroFest’s lack of a major splash in the scenic resort village to the post-­holiday blues. The village itself was lacking in bodies compared to busier times during the ski season, so it’s not too surprising they could only attract a modest crowd to the spacious, two-roomed Chalet des Voyageurs on Wednesday night (the weekday schedule also made it nearly impossible for Montrealers to make the trek).

ElectroFest certainly went on the offensive in the village itself, draping hotel elevators and restaurant entrances with promo posters and erecting a stage for midday outdoor DJ sets.

The Wednesday set I checked out, which starred the likes of High Klassified, Alex Metric, RYAN Playground and Clockwork, featured chalet-rattling bass, a questionable exclusive beer partner and a comfortable lounge area. Those who were there — 100 or so attractive, young types — were clearly having a blast, treating the night as a pre-­spring break hedonistic romp, and the line-up of acts was first-rate, although perhaps lacking in a household name to entice curious non­-electronic music fans in the area.

The youngish locals working at the nearby microbrew were also excited at the prospect of “dubstep” music coming to town. Ultimately, though, by the time High Klassified came on at 2 a.m. to close out the night, he was spinning to a room of only a dozen people.

There’s potential gold in these hills, since it’s unlike anything in the area, but attracting the 1,000 or so young people required to make a festival work in Tremblant would mean having to hold the festival during either the holiday or spring break. As someone who has fond memories of MuchMusic making their annual jaunts to the rockies for their Snow Job specials, I’d like to have the option of hitting the slopes for the day and cutting a rug afterwards.

One thing ElectroFest is not, though, is a substitute for Igloofest. The hour-and-40-minute-long schlep is just a hair too long for a casual in and out. ■