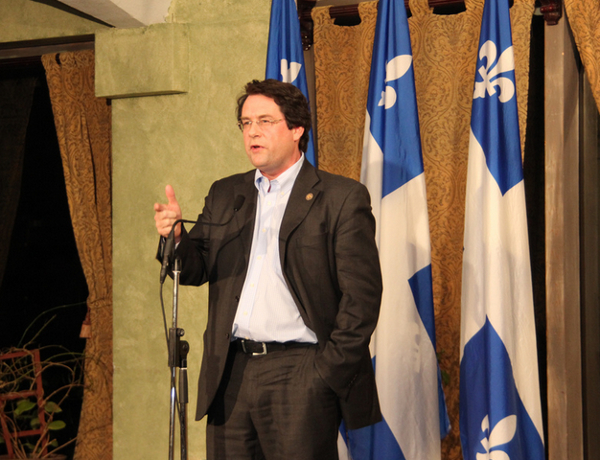 At long last, the charter hearings have begun. Naturally, the Parti Québécois’s controversial charter, which would bar public-sector employees from rocking hijabs, yarmulkes and the like on the job, has inspired some serious vitriol. Among those to take the stand on day one of the deal were a former lawyer, an LGBT spokesperson and a plain old citizen. While the barrister and concerned citizen objected to the charter, the LGBT spokesperson, Michelle Blanc, said Bill 60 didn’t go far enough. Seriously. Per Blanc, women in hijabs have been spat on because of the community she belongs to. Presumably, Blanc is of the opinion that barring women from wearing the veil would — well, shit, we don’t really know what she thinks it would do. But she sounded angry. And, truth be told, confused.

But anyway, yesterday was a bigger day in the hearings. Bernard Drainville, the man behind the bill, faced off with Liberal MNAs Marc Tanguay and Gilles Ouimet, both of whom demanded to know more about the legal opinions the PQ says proves the charter is not, you know, illegal. This, of course, comes on the heels of La Presse publishing a lengthy analysis in which the Quebec Bar Association took the bill apart piece by piece. Drainville, of course, maintained that the whole French primacy thing on which the bill is premised in no way threatens other groups in Quebec. But the best part of the day may have come when a woman said that though she thought she heard the sound of crying when she was picking her kid up from daycare one day, it was actually a call to prayer message (!!) on his computer. Naturally, the woman was appalled. Because that shit is such an affront to everything one is about when scooping one’s kid from daycare.

But enough charter talk. The Charbonneau Commission is still going strong, with FTQ-Construction pres Jean Lavallée — a god among men, apparently — taking the stand yesterday. Lavallée maintained that his agenda was always altruistic, and though he might have done things differently — he didn’t elaborate on how or why — people have “wiped their feet” on him over the course of the hearings. Others, however, have testified that Lavallée urged them not to worry about his and the FTQ’s bros’ criminal ties. Because that kind of talk is convincing.

Our still new-ish mayor, Denis Coderre, is taking off on a journey — perhaps of self-discovery — across Quebec. Actually, it’s not a continuous trek, but that doesn’t really matter. His first stop is Rimouski, where, today, he’ll cement the city’s ties with Montreal once again. Then, later this month, it’s off to Quebec City and Victoriaville and wherever else. Because, for Montreal, “2014 will be the year of municipal power.”

Finally, will we have to pay for a stay at either of the new superhospitals? We sure hope not. ■