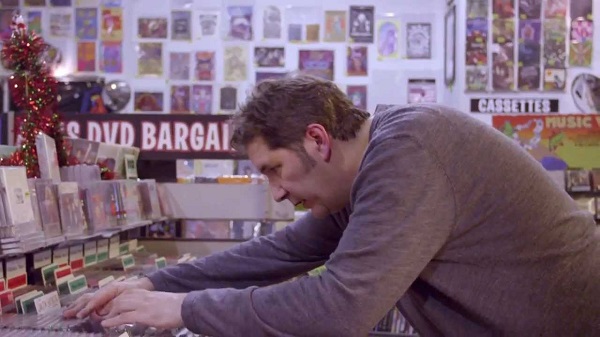 For those of you who loathe the festive tunes played on a loop at every mall, retail outlet and radio this time of year, the idea of a film devoted to Christmas music won’t likely pique your interest. But Mitchell Kezin’s documentary Jingle Bell Rocks isn’t like other festive films.

Kezin is not only a filmmaker, but a record collector, who focuses primarily on underground and alternative Christmas tunes — and he’s not the only one. In Jingle Bell Rocks, Kezin explains his borderline obsession with these songs and chats to artists, collectors and music legends as he explores some of his favourite finds.

Kezin got the idea to make the film from a desire to share these lesser known tunes with others — beyond the select few who receive his yearly Merry Mix compilation — and after receiving a record from a fellow collector, who’d photocopied an article from the now defunct Cool & Strange Music Magazine and placed it inside. “This particular article was about this handful of legendary Christmas collectors and it blew my mind,” says Kezin. “I had no idea that these guys were out there, that they existed. I really thought I was the only weirdo doing these compilations. I had no idea that there were other people or that there were legends within this subculture. This article talked about their collections, how vast they were, all the songs — it was literally a template for a documentary film. And I thought, that’s what I’m gonna do.”

The film, at first, was going to explore the songs solely from the perspective of the collector, but throughout the film’s development, this idea expanded. “It was going to be a much smaller movie,” says Kezin. “But once I started working on the script and really researching the songs I wanted to include, I thought, ‘Wait a minute — this doesn’t make any sense. I want to talk to the artists. I want to talk to the people who wrote and recorded these original songs.’ It made it a much more ambitious film. EyeSteelFilm were instrumental in helping me realize the movie in the way that it needed to be made.”

It’s been a long slog since the film’s inception in 2005. After several partnerships dissolving, production finally began in 2009. Sadly, during that time some of the artists that Kezin wanted to include in the film passed away. “There was one great tune by a rockabilly artist called Johnny Preston, who wrote a fabulous Christmas song called ‘I Want a Rock ‘n’ Roll Guitar.’ Just as I was about to reach out to him, he died of a heart attack. That was a song I really wanted to feature.”

Kezin also missed out on Chris Dedrick, leader of the Free Design, by a matter of weeks. “I waited too long — I didn’t realize he was ill,” he explains. “I had his contact info, I had his number, I had his email — I so desperately wanted the Free Design in the movie and I was nervous about approaching him so I kept putting it off. By the time I finally reached out to him he was in the last few weeks of his life and I just didn’t feel comfortable calling at that point. It’s my biggest regret, but at least we have a record where we hear his voice. We hear him talking about his Christmas songs very eloquently and thoughtfully. It worked out better for the movie because it’s a really touching and heartfelt scene.”

In a world of 24/7 Christmas music starting Nov. 1 (if not earlier), the idea of so many lost Christmas songs may seem strange, but this carol deluge wasn’t always the norm. “The window for Christmas music was about two weeks long, “ explains Kezin. “Most songs wouldn’t stand a chance because there was no room for them to be played. They would just play all the current hits, all the classics, because they only had such a finite time range. So these songs didn’t even have a chance to be heard. They were only played maybe just a couple times on local radio and there was no other place for them to be exposed. So of course they withered and died and no one heard them.

“Thank God there’s people like Andy [Cirzan] and Bill [Adler] and the other collectors, who are preservationists. They are the ones keeping music alive, finding it, uncovering these buried treasures and bringing them prominence and sharing them with people for free.” ■