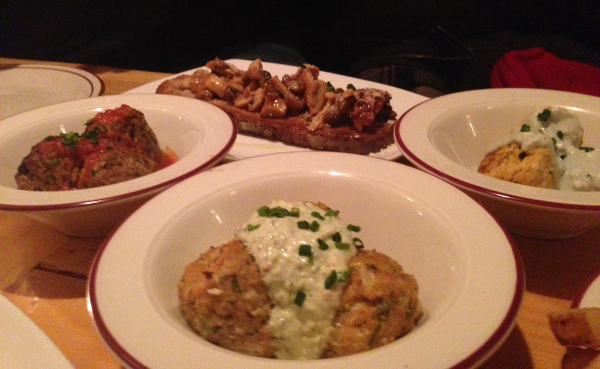 The spherical and soul-warming meatball is comfort food at its most inviting.

So is le Ballpark (6660 Clark), a new Little Italy resto, attempting to give spaghetti’s partner in crime an haute cuisine makeover? Perhaps, but one thing’s for certain: testing out le Ballpark’s tasty globes while the city was experiencing its first snowfall of the season was like reliving my childhood — coming in after playing in the fresh snow and being greeted with a hearty plate of Swedish meatballs for dinner.

Les boulettes du Ballpark managed to warm me up and surprise my taste buds. The menu is varied, and promises to change every week. I and my dining companions tried four of the five on the menu that night (the sixth, a falafel veggie option, was temporarily unavailable), and while each was made from a different ground meat, they were all filling and moist, and there was a sense of uniformity in terms of presentation and consistency. A serving of three meatballs costs $7, and for most people, either six meatballs or three and a side should suffice.

The first meatballs we tried, spicy chicken in a blue cheese sauce, were almost too good an introduction, since it can be hard to go from the potent taste of blue cheese to something more delicate, but there was just enough sauce as not to overpower the meat. Next up was the regular beef with tomato sauce, followed by tilapia balls in tartar sauce, before ending with the nicely garnished pork and shrimp thai balls. All four concoctions struck the right balance between fancy and familiar, and even the tilapia ball was a properly ground-up meatball, as opposed to being an awkwardly rolled up piece of fish.

The side salads — a corn one and a fennel one — were zesty and fresh, and a nice, light contrast to the big meatballs. The waitress said they plan on changing up the side menu on a weekly basis as well, but here’s hoping the fennel salad sticks. There was also a coach’s special (the restaurant’s only other sporting reference): a classic hot chicken sandwich. I saw someone order it; the gravy and peas glistened.

Le Ballpark is looking to push boundaries when it comes to meatball-based cuisine, and going by their early offerings, it might be on to something. Most importantly, it seems have a good grasp on what made the meatball a family staple in the first place. ■