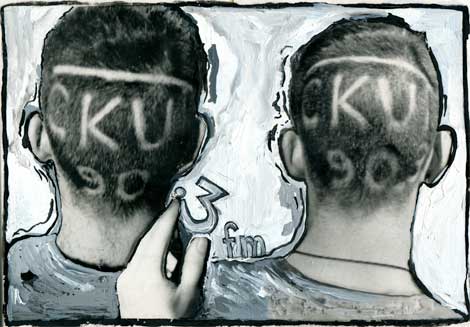 The team here at Cult MTL will be hosting CKUT 90.3 FM’s Montreal Sessions this month, every Tuesday in December from 3 to 5 p.m.

Tomorrow, Dec. 3, we’ll launch our month of programming by giving away a pair of tickets to see Arcade Fire at Parc Jean Drapeau on Aug. 30, 2014. The show will also feature our Culture editor Emily Raine speaking to the peeps behind the myriad art, craft and design fairs happening in Montreal this month, as well as checking in with local artist, curator and instigator Alan Ganev and scene reporter Rebecca Ugolini for the skinny on the year in art, including insights into this year’s inaugural MURAL fest, this week’s soccer-inspired Pitch cultural fest and the Station 16 heist.

On Dec. 10, our film team — Screen editor Kayla Marie Hillier and ace critics Malcolm Fraser and Alex Rose — will talk about the year’s best and worst movies, discuss the most anticipated releases of this pre-Oscar season and play some of their favourite music of 2013.

On Dec. 17, City editor Lucas Wisenthal will talk politics with columnist Peter Wheeland, and invite people to phone in and discuss the big issues that affected Montrealers this year. Food columnist Bartek Komorowski will also be featured, talking food trends and telling you what’s what on the local culinary scene.

On Dec. 24, Cult MTL editor-in-chief/music editor Lorraine Carpenter will play her favourite songs of 2013 and tip you off about the city’s best New Year’s Eve parties.

On Dec. 31, Lorraine will be back with Cult MTL renaissance man Erik Leijon and hip hop specialist Darcy MacDonald to discuss the best albums of 2013, the best local songs and the issues that have affected Montreal’s music scene this year.

So stay tuned to CKUT 90.3FM, or listen to our programs after they’ve aired via the station’s online audio archive. ■