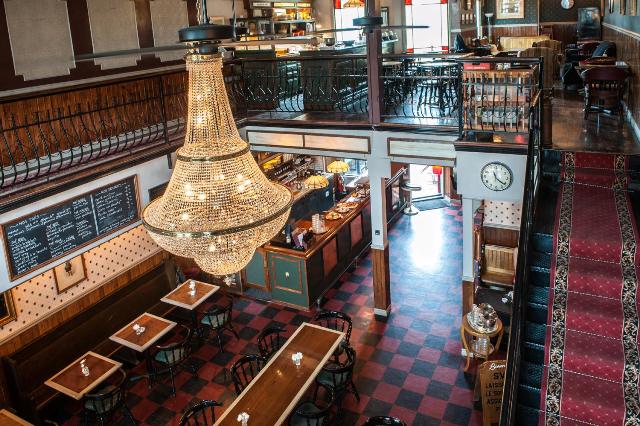 Coffee has hit a plateau. Any trendster worth his salt can rattle on about the virtues of pour over, the crimes of Starbucks and the merits of Stumptown, and Montreal is now saturated with third-wave joints that no longer inspire the Chowhound threads they once did.

So where to go from there? Tea, natch.

You can’t throw a stone without hitting a bubble tea joint downtown. McGill students now bypass Second Cup to park their laptops at the cozy Chai Tea Lounge on Parc. David’s Tea continues its cancerous spread, and imitators like the hilariously transparent Caesar’s Tea now inhabit our lower-end malls. When Starbucks acquired Teavana and announced an expansion of tea salons, tea became a bona fide thing. So it makes sense that the powers that be at Sparrow opened a tea room for the hipsterati, Cardinal (5326 St-Laurent), last Sunday. And, yes, they did so (directly next to their bar) in Mile End.

If the owners know how to do one thing, it’s create ambience. The two-level space is painstakingly renovated with a Victorian clubhouse vibe, complete with chandelier, a baby grand, mismatched antiques, artfully cluttered bookcases, dim lighting and plentiful alcoves. It achieves that elusive quality of being cozy but not cramped, studied but effortlessly so. It’s exactly the kind of vibe one seeks out during Montreal’s soul-crushing winter — sleepy but restorative.

Cardinal lacks the stifling formality of the “high tea” salons you’d bring your mom to on Mother’s Day, but you most definitely cannot saunter in for a pumpkin spice chai latte. In keeping with the Sparrow theme (and avian name), it is concerned with doing things the British way — and doing them right. That means you can expect the correct accoutrements: delicate floral China, sugar cubes, proper scones.

The rest of the menu holds no surprises: Brit-inspired baked goods (including savoury muffins), tea sandwiches and a blessedly short tea list that is heavier on blacks than any other kind (when in Rome, etc.). I was secretly hoping for clotted cream (I learned later that they do have it — I didn’t ask), but was satisfied with the good butter and quality jam that came with my perfectly moist scone.

Sunday was a soft opening — and seemed mostly filled with acquaintances of the people involved with the place — but the service was fast and friendly, and everything seemed to be in order. Just in time for the season in which we need it most. ■