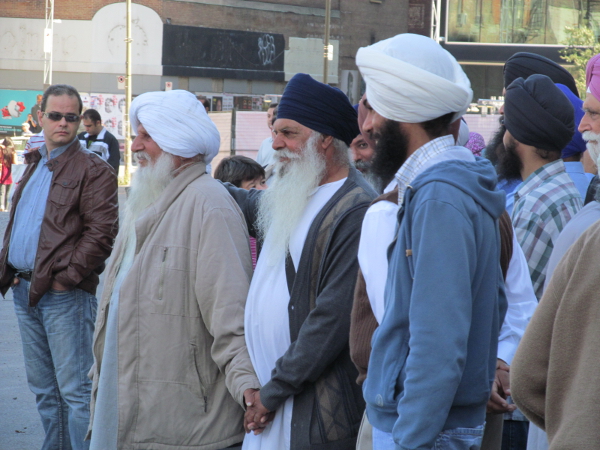 Under Bill 60, Sikh men would be required to remove their turbans if they want to work for the Quebec government or any of its suppliers.

I’m beginning to wonder whether the Parti Québécois is playing Chicken Run with the Charter of Blah-Blah (Bill 60). Like a scene from Rebel Without a Cause (ask your parents), the PQ is loudly revving its engines, challenging the Liberals and Coalition Avenir Québec to race toward the cliff of religious intolerance.

The tactic, unfortunately, seems to be working. Liberal leader Philippe Couillard’s position has already slipped from “over my dead body” to “let’s talk about it” after his authority was challenged by Moroccan-born MNA Fatima Houda-Pepin, a secular Muslim. Fearing an incident similar to the Bloc Québécois’s rupture with MP Maria Mourani after she expressed opposition to the Charter, “Flip-flop” Couillard said he was willing to consider the banning of the wearing of religious symbols by “people in authority” such as police and prison guards.

Debating who’s in a position of authority is not just a “slippery slope” — it’s more like a Red Bull Crashed Ice run. When proposed by the Bouchard-Taylor Commission on religious accommodation, the banning of religious gear was only intended to apply to judges, prison guards and police, i.e. authority figures who can threaten your liberty. Not that there was a problem there. (When was the last time you heard about a prison guard or judge wearing a turban, let alone a burqa?)

The PQ took that opening and barrelled right to the bottom of the ice run in a giant bobsled that took out all civil servants — and a bunch of bystanders to boot. When Bill 60 was finally tabled after months of deliberate leaks, it was even more restrictive than earlier PQ proposals, newly targeting private companies that supply goods or services to the province.

Bill 60 will, of course, never see the light of day. Which suits the PQ just fine, thank you very much. Party strategists didn’t come up with this Trojan Horse because they want to enter it in the Trifecta. The goal was to infect Quebec with a virus (enough already with the metaphors!) that would inflame public opinion and allow the PQ to offer itself as the only cure for those who think Islam is the religious equivalent of AIDS.

The next move in the charade is the series of public hearings scheduled to start Jan. 14. Ostensibly, the hearings allow the government to solicit public input and eventually modify the draft law accordingly. But as we’ve already seen in an earlier online “consultation,” the PQ will only listen to people who back the Charter, not those who oppose it. The PQ wants to distance itself as much as possible from the CAQ position, which can only mean another shift to the right.  So you can expect a further toughening of the religious restrictions, since the PQ seems to think that the only reasonable accommodation is no accommodation at all.

That sets the stage for another confrontation between the minority PQ and the opposition parties, one that will lead Premier Pauline Marois to issue an election call over the issue. Since this is such a Manichean debate — there’s little middle ground — the PQ will stand firm. The CAQ, on the other hand, fearing the loss of its rural base, will drift closer to the PQ position, making it look like the weak sister. And the Liberals — whose supporters have held their noses for decades — will also move to the right, knowing full well that doing so will gain 10 votes for every one lost.

If the strategy succeeds, the PQ will be re-elected on the strength of anti-Muslim sentiment, which is most pronounced in the rural ridings where people don’t know the difference between a hijab and a kebab.

Whether it’s a minority or majority government will determine how much longer we’ll have to fight the virus. A majority PQ is actually the better scenario, since the party will finally feel it’s in a position to stop being the #asshats of the #assnat and accept the compromise position endorsed by almost all of the former PQ and Bloc leaders. That’s basically the Bouchard-Taylor recommendation re: judges, cops and guards, which the CAQ already supports, the Bloc used to support, and the Liberals might be ready to accept.

But Allah forbid another Marois minority, because that will sentence us to several more years of a “debate” where no one changes their mind and Quebec continues to garner a reputation for intolerance.

(The people who call this argument “Quebec-bashing” are like the people who equate criticism of the Israeli government with anti-Semitism. There are lots of pure-laine Quebecers who think Bill 60 is racist, xenophobic, islamophobic, intolerant or a violation of human rights. They are not anti-Quebec. Like me, they would think the same thing if it happened in Ontario, Alberta or anywhere else. I can’t think of a better “Quebec value” than that.)

The number of Quebec institutions that oppose the religious signs provisions of Bill 60 — and who would be directly affected by it — grows every day. And we’re not just talking about the usual suspects: this week, three of the major francophone universities joined a chorus that includes everyone from the Chambre de Commerce to Québec Solidaire.

These institution are warning that the bill threatens to hurt their ability to attract foreign investors, doctors, researchers or students to a province where religious expression is restricted. While people like Bernard Drainville, the minister piloting Bill 60, may pooh-pooh the idea that people will quit their jobs or migrate elsewhere rather than knuckle under, he is either delusional or duplicitous.

Whether the bill is adopted or not, the virus it unleashed has already weakened the province in thousands of concrete ways. It has pitted cities against rural ridings, feminists against feminists, sovereignists against sovereignists. Worse, it has made the Muslim women it is supposed to liberate the victims of public attacks and derision.

Someone needs to remind the PQ that the goal of Chicken Run is not to charge over the cliff, but to apply the brakes before you get there. ■

Peter Wheeland is a Montreal journalist and stand-up comic. His sardonic observations about the city and province appear every Wednesday. Follow him on Twitter, and find out about his upcoming stand-up performances here.