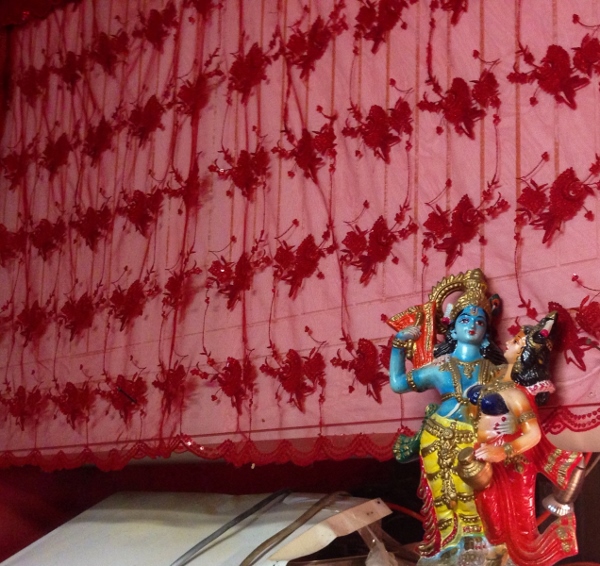 These gods won’t save you from the spice

At the southeastern edge of Parc Ex, home to most of the city’s finest, cheapest Indian and Pakistani restaurants, is a business that I’ve had an eye on for years: a small Sri Lankan restaurant rebranded VIP in 2010. Before my first real visit two weeks ago, I’d ventured as close as the doorway, where I grabbed a take-out menu containing just enough English words and photos to discourage me. There are pretty much no vegetarian options at VIP, unless you’re into plain rice and bread.

Regardless, I recently took a closer look and found more options inside. Along with samosas (which I passed over due to samosa fatigue, a condition I share with a fair number of whities in this neighbourhood), the glass case by VIP’s cash is loaded with roti rolls, stuffed with delicious mounds of mashed potato, onion, chilies and turmeric — so good. The bread on offer is parotta, a thicker version of the more common Indian flatbread called (no, not naan) paratha. Parotta is made with maida (akin to cake flour), ghee and egg. Even on its own, its spongy texture and rich taste were very satisfying.

Then I did something I hadn’t done since I was 16: I ordered a dish with chicken in it. Sure, my cats ended up eating most of the chicken (and its bone), but I did eat a couple of chicken forkfuls. It was pretty much as I remembered it from childhood, except my mother doesn’t mess with extreme spices. The dish was chicken biryani, which is not a bad option for a vegetarian sharing their meal with a carnivore (or three) — the chicken comes in leg form, rather than being chopped or pulled and mixed in with the rice. If you know Indian food, you know biryani is a rice dish prepped with vegetables and spices. The same is true of this Sri Lankan variant, which also came with a whole hard-boiled egg.

On my first visit, the difference between this and any other biryani I’d tried was immediately apparent. The heat was high, but it was the flavour that set off alarms — it was so strong, it was practically metallic. My suspicion that someone had accidentally dumped too much mystery spice (ground coriander?) into the mix was confirmed on my second visit, when my husband ordered the biryani (with beef). It was hot but not nearly as strong, the flavour bold but not overbearing. With the egg and bit of salad (which was more like a fresh salsa) on the side, this is a great dish, at least when it’s prepared with some restraint.

My second order involved more chicken. It couldn’t be avoided. There are only two or three meals on the menu, the others being more conventional curries (made with chicken, beef or mutton, over rice or roti) and not all the dishes are available all the time — the “fish bun” appetizer continues to elude me. The guy at the cash told me that chili chicken was the hottest dish on offer, and when I ordered it to go, a customer of South Asian origin warned me that my people don’t take well to such spicy food, at least at first. Fair warning.

It smelled amazing. I opened the styrofoam container (sorry, planet) and then the foil wrap to find an assortment of chicken pieces and onion chunks in a red chili sauce — a homemade sambal oelek. This hot sauce is commercially available, care of the same California company that produces sriracha, and I often add a teaspoon of it to large pots of soup. Imagine eating it straight.

I kind of failed my first serious Sri Lankan spice test. Not wanting to spoon this devil sauce into my face or eat a crapload of chicken, I didn’t get through most of the dish, and only one of my cats dared eat the sambal-steeped chicken — he’s a Parc Ex native, and looks like a Bombay, so draw your own (racist?) conclusions.

After getting to know most of the Indian joints in the hood, it’s nice to find a twist on the familiar, despite the limited menu. I’ll certainly return to VIP for the biryani, the roti rolls, maybe the fish bun (one day), not to mention the friendly, welcoming service and prices. These mountains of food cost $5 a piece. ■