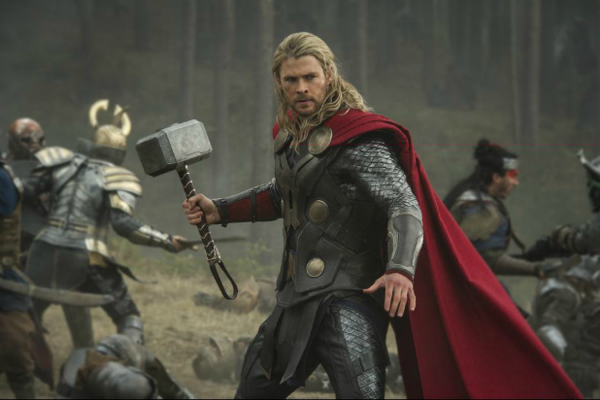 Thor is probably one of the more difficult superheroes to convincingly bring to life on screen. He’s a literal Norse god who spends most of his time chucking his hammer around his make-‘em-up kingdom in space. In the broody, contemplative superhero world of today, that’s a hard sell.

Kenneth Branagh’s stab at bringing Thor to life dealt mostly with his fish-out-of-water antics as he chased his dickhead brother on Earth, pausing periodically to appreciate the earthly delight of pancakes. While an entertaining enough blockbuster, it was also basically Encino Man on a massive scale. This second installment sees Branagh replaced by Alan Taylor, a veteran TV director with several episodes of Mad Men and Game of Thrones under his belt, and it digs deeper into the mythology and fantastical elements of the character — for better or worse.

Having returned to his kingdom of Asgard with his meddlesome brother Loki (Tom Hiddleston) captive, Thor (Chris Hemsworth) sets about righting wrongs in the Nine Realms while still being passably emo about his love Jane (Natalie Portman), a mere mortal astrophysicist toiling around on Earth. Jane’s working in London with her assistant Darcy (Kat Dennings) when they stumble upon a portal to another world. Jane falls in it and absorbs the Aether, some kind of fabled symbiotic thing from one of the Nine Realms. Her absorption wakes up Malekith (Christopher Eccleston), a very evil humanoid with white dreadlocks (who would’ve thought the guy from the Offspring’s style would become shorthand for a very evil being?) intent on restoring his perceived order of the Nine Realms by destroying them all. Thor whisks Jane up to Asgard in order to save her (and the entire world — par for the course as these things go).

Since I’m generally not so into fiction that features convoluted gobbledygook backstories about dark worlds and evil beings and planets that look like trippy prog-rock album sleeves from the ‘70s, I was somewhat apprehensive when the film began with Anthony Hopkins spewing forth oodles of nonsense voiceover. And don’t get me wrong, the plot machinations in place to get Thor 2: The Dark World running are mostly nonsensical. They’re an excuse for good guys to clash with bad guys and, once that happens, it’s a perfectly satisfying slam-bang fantasy flick. The action scenes are clean and clear, the production design surprisingly gorgeous (although leaning heavily on the aforementioned Hipgnosis-inspired, bugged-out LP sleeve style) and the comic relief predictable but effective (Stellan Skarsgard in his underwear is a can’t-lose proposition).

But really, Thor 2: The Dark World’s biggest flaw is one that has altogether little to do with the mechanics of the film and more to do with the universe in which it exists. Despite being a huge, expensive blockbuster, it feels altogether slight and low-stakes. Its place as a cog in the giant machine that is the unstoppable Marvel universe juggernaut means that no one is truly in danger (since they may be needed for the next Avengers movie, or to pop into the second Captain America for a quick cameo, or to sell Slurpees during Saturday morning cartoons) and that order will undoubtedly be restored by the time the credits roll. Even within the parameters of a big-budget tentpole franchise, it’s off-puttingly safe.

A lot of digital ink has been spilled proclaiming the death of cinema at the hands of episodic television. Many argue that shows like Breaking Bad and Game of Thrones can now tell a story better than movies ever could. While I personally can’t agree with that assessment, it’s hard to see Thor 2 and not see it as a dispassionate attempt to tell a serialized story on a grand scale. Marvel appears to be designing its universe to play like a long, expensive and elaborate series for future generations to binge watch on whatever futuristic version of Netflix will exist then. Thor 2 comes off as not much more than a pretty okay mid-season episode of a series with no end in sight. ■