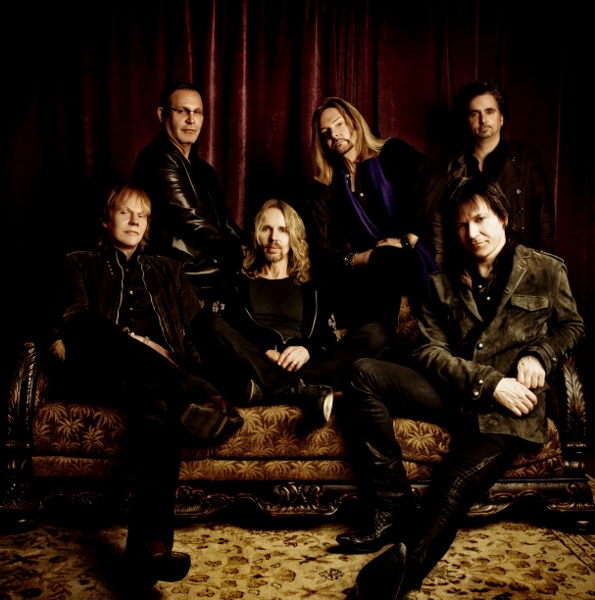 My house growing up had strict rules against R-rated television. So every unsupervised opportunity I got, it was either The Jerry Springer Show or South Park on the telly with the volume verra, verra low. One such occasion, in 1998, Eric Cartman sang “Come Sail Away” and boom! I was the newest member of the Styx fan club.

You didn’t have to grow up in the ’70s or ’80s, feathering your hair to their eight-tracks, to like them. The band is featured a ridiculous amount of recent and semi-recent TV, film, radio and advertising, from Beavis and Butthead to Sex and the City, Big Daddy to The Virgin Suicides, plus regular play on classic rock radio. I mean, you’d probably even be hard-pressed to find someone in their 20s or 30s who doesn’t look back fondly at that car commercial featuring “Mr. Roboto.” The prog-rock legends are firmly implanted in the collective pop unconscious of the Boomer generation right up to the youngsters of today.

Styx are bringing their theatrical rock show to Montreal this Sunday. I caught up with Lawrence Gowan (aka Gowan) — he replaced Dennis DeYoung as keyboardist and lead singer in 1999 — to talk about pyrotechnics, fake moustaches and Rob Ford.

Gregory Pike: Styx is one of those bands that gets referenced all over popular culture. How do you think that’s played a role in the band’s continued success?

Lawrence Gowan: I think that’s actually a big part of why the band is still successful today. In the last seven or eight years that I’ve been in the band, I think about 50 per cent of the audience has been under 30. But when I first started in the band, which was about 15 years ago, the audience was mostly the same age as us or a little bit older. Maybe like 5 to 10 per cent of the people were under 30, but it’d usually be a younger brother or sister or something. I noticed about eight years ago, though, that the audience was getting younger, and we tried to come up with an explanation. Adam Sandler had this movie called Big Daddy where the kid on the witness stand at the end says, “Styx is the greatest American rock band ever, and the only reason they caught a bad rap is because critics are cynical assholes.” All these references just kept popping up. And at the same time, with YouTube exploding, anyone can look up videos from our past.

GP: What can we expect from this tour?

LG: We plan on playing something from every era of the band. But the band’s in its fifth decade, so when people come out they want to hear as much of the past as they possibly can. So that’s what we focus on.

GP: I know that your stage act can be a little ambitious sometimes. I read about a pyrotechnics mishap involving a keyboard.

LG: [laughs] I like the way you phrased that — very “ambitious.” More like theatrically reckless! I look back sometimes and think, oh my God, how haven’t I managed to kill myself with some of the stunts I used to do? That time, in St. John’s, Nfld., I had a keyboard that could spin and I set it on fire. Back then, my hair was easily three quarters of the way down my back, and after using a bit too much lighter fluid, I got a free haircut right there on stage courtesy of the flames.

LG: Spinal Tap still isn’t close to some of the things I’ve done on stage over the years [laughs]. I mean, that movie is still fairly accurate when it comes to rock theatre, though. The beauty of rock theatre is that a lot of it is invented on the spot, fuelled by the intensity coming from the audience, which often supersedes your expectations. And that’s part of where the entertainment comes from. It’s in the moment, and it’s unexpected.

GP: And after so many years of recording and touring, what’s the secret to staying motivated and fresh?

LG: Well, there are many factors. I think the adrenaline that surges through you in front of an audience that’s really digging the show  you just get addicted to that. I happen to be in a band with five other guys who are exactly the same way. You might be playing the same songs, but there’s every opportunity to get it better than you got it before.

GP: Is it true that, growing up in Toronto, you used your mom’s eyeliner to sneak into clubs underage to see bands?

LG: Yes [laughs]. You’ve definitely dug into the past. When I was 15, I just wanted to ditch school and go to the Royal Conservatory and take piano full time. And there were so many bands playing in clubs in Toronto that I just felt like I had to see them. There was this one band called Devotion, and I heard them playing Jethro Tull, Yes and Genesis songs, and I was like, that’s impossible! How did you get your keyboards to do that? I was really baby-faced at that age, so I got my mom’s eyeliner pencil and drew a fake moustache. And the bouncer was just dumb enough to fall for it.

GP: Any thoughts on the Rob Ford controversy?