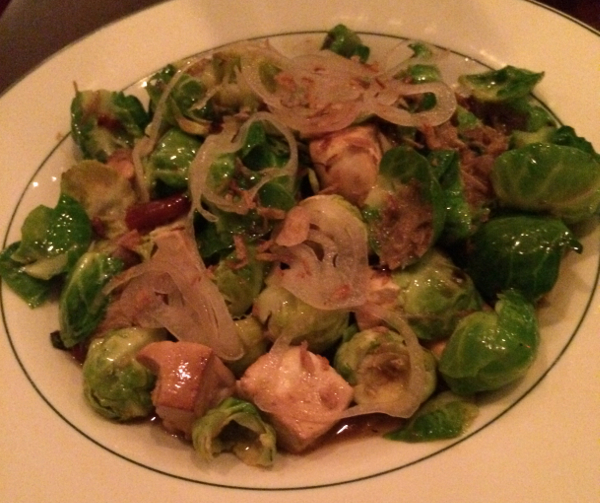 You’ve probably heard buzz about Orange Rouge (106 de la Gauchetière W.). That may have to do with the chef, Aaron Langille (most recently of Café Sardine), its location (the Wing’s Noodle Factory building) or its concept (Chinatown-inspired cuisine). All are worthy of the hype. It’s a restaurant that is is of-the-moment but not trendy, which is to say that it’s not gimmicky (unless you consider the takeout-inspired menus gimmicky — I don’t). If you haven’t gone yet and/or have no idea what “Chinatown-inspired cuisine” means, here’s a primer on Orange Rouge.

Why Chinatown?
According to Langille, “Chinatown’s been a dream of many chefs in this city for a very long time.” He says he thought it would be stupid to miss out on the opportunity to open up in the building, which is right off of St-Urbain on de la Gauchetière W.

Is it a Chinese restaurant?
Langille is quick to say that he thinks of Orange Rouge more as a tribute to Chinatown than as a Chinese restaurant. His food riffs on Chinese dishes, like mapo tofu and Cantonese duck, as well as Japanese and Thai classics. It’s Asian fusion in the most innovative (and tastiest) sense. For example, that mapo tofu resembled the Chinese dish only inasmuch as it featured cubes of tofu in a dark sauce. It was “mapo tofu” in name only, completely inauthentic (intentionally so) and intensely delicious. It featured smoked tofu, Brussels sprouts and, instead of ground pork or beef, succulent morsels of duck.

I spied the canard rôti (at $64, it’s meant for a group) at a neighbouring table and salivated from afar as a group of men chowed down on a golden pyramid of duck parts served with (what looked like) traditional steamed buns. A waitress tried to assuage the deep regret my dining companion and I felt by telling us it would have been a lot for two girls. I think we probably could have handled it.

So is it, as rumours have suggested, similar to Danny Bowien’s Sichuan-inspired San Francisco/NYC restaurant, Mission Chinese?
Langille hasn’t even eaten there. His cooking is also way more refined than Bowien’s, though Orange Rouge and Mission are united in their chefs’ willingness to take liberties (to great effect) with traditional dishes. They both feature a take on the Michelada, but that’s probably coincidence.

Can you break it down?
There’s a section of snacks that range from $3–$7. We tried the fried whitebait (blanchailles) — tiny whole fish. They were crispy, salty and a little sweet. Really, the perfect snack. There’s a small section of larger dishes (prices vary) and another one of medium-sized plates ($7–$16). All are meant to be shared. In addition to the mapo tofu and blanchailles, I tried the chrysanthemum salad (a nice contrast to the heavier dishes, but a little boring); the BBQ pork with oyster emulsion (as good as it sounds); and the eggplant, lotus, goat cheese and mint dish (see what Langille means when he says it’s not a Chinese restaurant? Also, it’s very good). I appreciated the inventiveness of the dumpling dessert (it’s listed as “xiao long bao,” though it’s crescent-shaped rather than round) and the “yuzu et chocolat,” but the dessert I enjoyed most purely was the simplest: the orange ice cream.

Is there a brunch?
As of last weekend, yes. The restaurant is closed Sundays and Mondays, so it’s only on Saturday (it’s also open for lunch Tues–Fri). Langille is still putting the menu together, but says it will be based off the food he’s eaten in Chinatown before work. There’ll be a “spin” on congee, a version of the Malaysian dish nasi lemak and a noodle dish with meat sauce that Langille “always thought would be best for hangovers and breakfast if somebody just put an egg on it.”

Is there booze?
Yup. Try the cocktails.

Will I have to wait long?
It’s walk-in only, so yeah. The wait for a table for two last Saturday wasn’t bad, though a larger group of Cult MTL staff and friends who showed up behind me quit the line (that was a mistake, guys). The wait time is bound to grow, though.