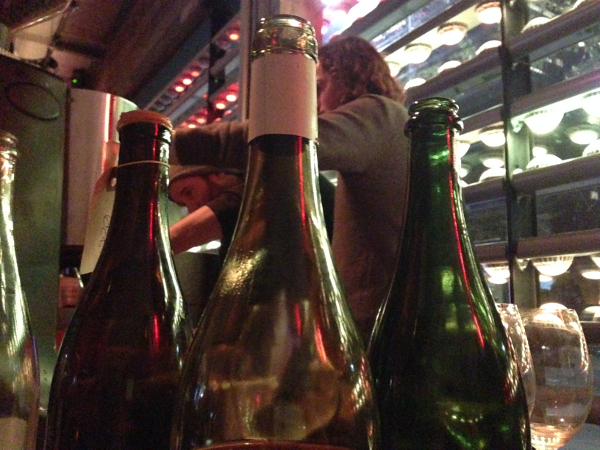 There is truly only so much one can say by way of a review of a party — this owing to the insistent reality that the measure of many a great party is that one, although certain that one has enjoyed it immensely, remembers it only in fleeting impressions and snippets of conversation, provided there wasn’t something like an elephant being painted or the loss of a shoe in an indoor moat.

The Vin Vignerons Vinyles party held at the SAT Monday night to close out Raspipav, the weekend-long private importation wine fair, certainly fit the bill of “a hell of a party.” Organized by Vanya Philipovic and Dominic Allnut of Vinnovation (the former of Joe Beef/Le Vin Papillon as well), it was a maelstrom of beats and food and wine, with beautiful NB oysters and raw scallops from Joe Beef’s roving Choice Harbour oyster bar, pork donuts from the Au Pied de Cochon food truck, chicken and trotter pies from Lawrence, a whole crew of others, and, you know, a whole fucking pig, publicly butchered by Joshua Applestone of Fleisher’s NYC and brought to culinary finish by Joe Beef/Le Vin Papillon’s Marc-Olivier Frappier. Ain’t a party without a whole pig, I say, and I truly wish more people would say.

Wines from Vinnovation, Oeonopole, la QV, and Selection Bambara really captured the spirit, highlighting much of the private import scene, and boosting the culinary scene in Montreal these days, as more and more of the rad newer-to-the-scene restos and their sommeliers turn to private importers for their careful curation and the opportunity to work more closely with smaller producers.

Cracking Champagnes and Chablis, and wines like the Rossoibleo from Sicily’s Gulfi winery — less wine that is merely “very drinkable” than wine that bails down your throat like it has all the retribution, hellfire and comeuppance of a well-lived (if short) life on its tail. Wine that hits the ground running, and all you can do is move with it — wine that is vital. This was a line that I heard over and over again the weekend leading up to Vin Vignerons Vinyles; it was all about living wine, lively wine, the very bearable lightness of drinking.

If one wants to be able to face oneself in the morning, one really must avoid hackneyed phrases like “a veritable who’s who,” “the wine was flowing” and “so-and-so really knows how to throw a party,” but, I mean, it was and they do, so there you have it. ■