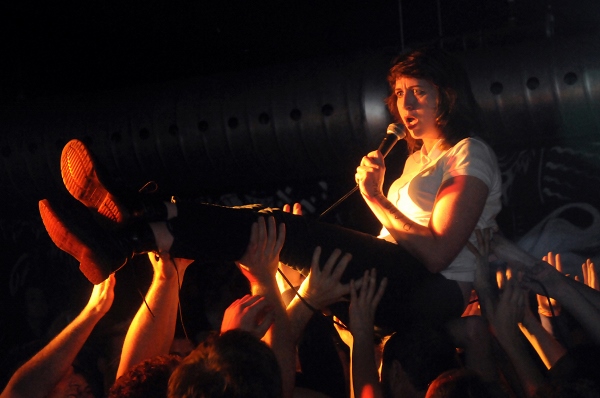 We Are Wolves, Duchess Says and Solids

Three of Montreal’s loudest bands shared a bill at Underworld, and did not disappoint in the decibel department. The sold-out crowd was packed like sardines in a tin box lined with a ’90s aesthetic. They first sweated to the newbies, Solids, and batted around their swinging light fixtures. The guitar-and-drum duo recently signed with an American label (Fat Possum), and it’s easy to see why the Yanks would come calling: Solids play at a breakneck pace, but are always able to sustain a propulsive groove. Duchess Says have long been one of the city’s most unhinged live acts, but that fact occasionally needs to be reinforced. Frontwoman Annie-Claude Deschênes still has crazy eyes (with dirty contact lenses in them) and a blood-curdling shriek, and their sloppy electronic punk sound continues to incite some aggressive pogoing. By the time We Are Wolves took the stage past 1 a.m., most were looking for walls and bars to lean on — to be expected when you pack three frenetic acts in one night.

There was a secret Friday afternoon set for M for Montreal delegates at Nomad Nation on Van Horne, but since it was filmed for future Internet viewing purposes, I don’t feel bad telling you about this gathering of some of Montreal’s finest players (plus a few other guests). The reason for gathering Patrick Watson, Brad Barr, Sarah Page, Miracle Fortress, Joe Grass (rocking it on lap steel), Jill Barber, AroarA, Toronto singer-songwriter Alejandra Ribera and Quebec folk singer Safia Nolin in one spot? To perform selections from Beck’s 2012 sheet music book, Song Reader, of course. Based on the performances, I’d say some of Beck’s most inventive songwriting has been kept hidden from the sheet-music-illiterate, although I suppose part of the fun is to hear someone like Miracle Fortress interpret “Saint Dude” and think about how Beck might have originally conceived it. Having Watson, Barr, Page and Grass play at the same time is something that needs to happen more often.

I think I might have left this one a bit too early, but the adam’s apple dislodging bass of Purity Ring (in a DJ set format) was calling at neighbouring SAT, so I left Club Soda right before the sold-out audience was subjected to some good old-fashioned drunken male nudity. Mac DeMarco’s live set has (d)evolved into jubilant, carefree slop, the songs contorted and twisted every which way — and subject to overzealous stage crashers — but always keeping the memorable kernels intact. Can Majical Cloudz’s austere set-up and emotional nakedness work in a larger space like Club Soda? I thought the sound on singer Devon Welsh’s vocals was a bit muddy, but that also could have been the result of a very gabby crowd that would NOT SHUT THE HELL UP. (Then again, Welsh said he didn’t mind and asked that nobody make any shushing noises.) I was about a foot away from the stage at Casa del Popolo on Wednesday for the group’s showcase performance, and I appreciated being able to gaze into Welsh’s intense eyes.

First and foremost, M for Montreal remains a festival for international delegates (industry types, media) looking to get a taste of the local scene in a digestible format. Bilingual rap troupe Dead Obies were lauded on social media following their Saturday afternoon showcase performance, which means the ROC and beyond might finally be ready to accept a Quebec crew as something other than a cultural novelty. Dead Obies are more than capable of being the band to break the glass ceiling. Smooth ’80s-inspired pop-rock group Seoul are young and polished, so keep an ear peeled. At SAT on Thursday, A Tribe Called Red and Tommy Kruise did what they’ve done on numerous occasions in Montreal in 2013 — put on a tremendous party for dancing fiends and music nerds alike. ■

To see more photos from M for Montreal 2013, click here