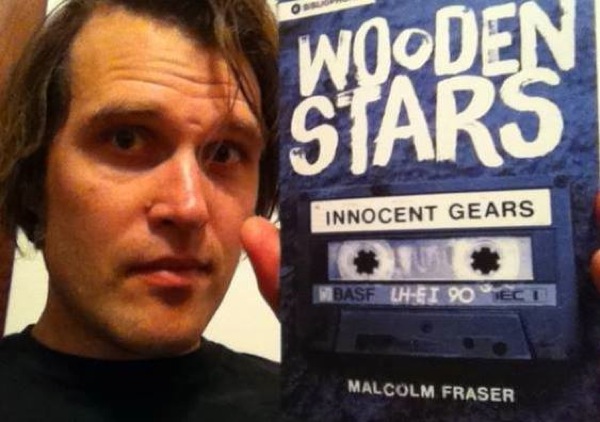 Cult MTL film writer, musician and anglo-for-hire Malcolm Fraser is adding another title to his already busy platter with the release of his first book, Wooden Stars: Innocent Gears. This biography of ‘90s Ottawa cult alt-rockers (released as part of Invisible Publishing’s Bibliophonic series) hit the shelves a few weeks ago. We caught up with Fraser a few days before his official launch and reading this week.

Alex Rose: What made you choose Wooden Stars over other artists for the book?
Malcolm Fraser: I’ve always been fascinated by the band and thought they deserved a bigger audience. I was just now looking over an old pitch I wrote for an article about them (when they broke up the first time) dating from ’99 or 2000. So I guess it’s been in the works for a while.

More recently, though, when I wanted to pitch some ideas to Invisible, I suggested a few ideas and this was the one they went for. I was a bit surprised, but if you look at the artists the series has covered (the Dears, NoMeansNo, the Deadly Snakes), it’s kind of an alternative history of Canadian rock music, based on factors other than just popularity.

AR: How different was the experience of writing the book compared to, say, a band profile?
MF: I don’t have a lot of experience writing about music, actually. I’ve generally tried to avoid it. I find that having studied film and written about film, my perspective on film is kind of jaded, whereas music still has a small shred of innocence to me that I try to keep.

It was different from my usual writing in a few ways. I had a whole book to write instead of just a small article, so it allowed me to expound on things in more detail. Also, the editors wanted me to put my own personal experience into it, so that was a whole other challenge — to mix in the band’s story with my own.

AR: Do you feel that having some level of acquaintance with the people involved made writing the book easier or harder? Obviously you want to show your appreciation for the band, but you want to avoid it sounding like a press release.
MF: Yes, that was a challenge, too. It probably made it easier in the sense that they had a certain comfort level in talking to me. As far as the tone, I do know the guys from the band to one degree or another, so there was a certain awkwardness at times when I was trying to be honest and have some critical perspective. But if anything, I now worry that I come off like too much of a fanboy!

AR: Let’s say someone asked you to write a book about Canadian underground bands that has the same approach as Michael Azerrad’s Our Band Could Be Your Life. Using Innocent Gears to build upon, what other artists would you write about?
MF: Well, there is already a book by Michael Barclay called Have Not Been the Same that covers that kind of ground on the Canadian tip, not to mention essential tomes like the books on Dayglo Abortions, Bunchofuckinggoofs and of course the autobiography of Helix lead singer Brian Vollmer. Mine would obviously have to go even further underground.

It would definitely have to include Corpusse (who I’ve already done a documentary on, but who always merits more coverage); the “Torontopia” scene of Ninja High School, Republic of Safety, etc; Bob Snider (longtime East Coast busker/folkie); Don Cash (a mysterious Toronto-based rapper/former journalist); the Smalls (Alberta punk/metal band who were around forever and toured all over the world — Corb Lund was a member before he went country); the genius of Vancouver’s karaoke duo Canned Hamm; and of course Québec’s mysterious outsider Casio crooner Normand L’Amour! That’s just off the top of my head. There’s a lot of Canadian weirdos out there! If any publishers want to talk, I’m open to discussion. ■