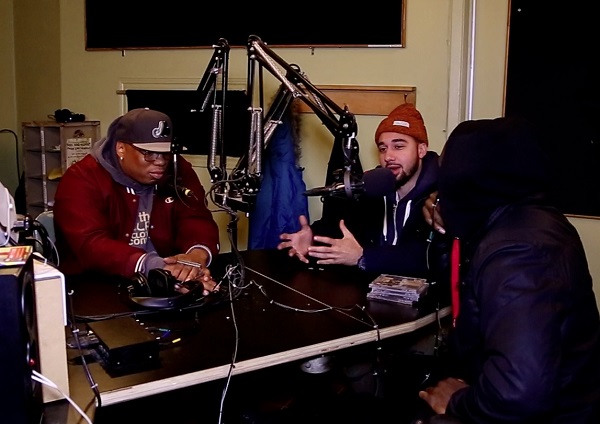 Can’t decide whether you’d prefer being in Between Time or at Zero Gravity this Saturday?

Head to le Belmont and do both at once, then, at Kings High, when Montreal mic controllers Full Course and CeasRock drop their new records, with support from equally heavyweight local rapper L.E.S. and longstanding city crew Northern Lights, DJ Simahlak and host the Narcicyst for a double-launch sure to go down in the books as one of the biggest nights ever in MTL hip hop history:

Maybe you’re in it for the club-and-speaker-ready sounds of CeasRock’s sharp style, or perhaps Full Course’s distinctively more laid-back sensibility (rounded out on Between Time with the assistance of Kendrick-affiliated “Bitch Don’t Kill My Vibe” producer Tae Beast for six tracks) is calling out to you. Maybe you’re in it for the limited edition “Kings High” tuque that comes with each ticket.

Maybe you have amazing taste in rap and know that missing this would be just dumb. The duo sat down with Cult MTL to explain why.

Darcy MacDonald: So let’s talk about the genesis of this double launch show. How did it come to be?

Full Course: We brainstormed it — on the way to, or on the way back from…

CeasRock: On the way back from NXNE [last June].

FC: Word, on the way back from playing out there with Mook Life, Smif ‘n’ Wessun and whatnot. We were kinda just flirting with the idea.

CR: We’ve known each other for a while now. We’re friends. I’ll go to Richy’s and play video games and shit like that, more than we rap, I would say.

FC: We don’t even have any tracks together.

(Author’s note: the pair do appear on some of the same songs, through collaboration with producers as opposed to having written them together.)

CR: We were out there, and we were just talking about what resources we both have at our disposal. And we thought we could maybe do a tour, because we don’t step on each other’s toes musically. We’re not in the same lane. We complement each other’s vibes. So we thought we could do a show, at least. When I had my idea of doing my own launch, and I had picked the date, Richy was like, “I’m dropping something around then, too.” So we thought, why compete for this small-ass community to come out twice?

DM: Ceas, you’ve taken on the Belmont before as a headliner. Rich, you’re fam there. It’s pretty cool — a double-launch is a rare initiative to take on. It’s more like, a show.

DM: There’s power behind it.

CR: Definitely. We went and sought out some real respectable figures. The fact that we’re working with L.E.S. and Northern Lights, and Narcy hosting.

I was thinking about a host. Last year for my (tuxedo-clad live band) Coolest Cat launch, (radio personality) Don Smooth hosted. He was great. He had hosted that mixtape, so it all made sense. He has that “cool” energy, and is adult. But this year I was like, I need someone to bring another energy. And I was thinking, we don’t really have many hosts. We have MCs that grab the mic on DJ sets and whatnot, but they’re connected to the rap community. They do hip hop, but they’re more affiliated on the DJ side. So I thought of Narcy to be involved. And if he decides to rap, it’s a bonus for everyone there. Plus, we got Simahlak spinning. It’s an OG Montreal show.

FC: Also, L.E.S. and Northern Lights have their own projects on the go.

Even with [my 2011 debut EP] Entree, there was no fanfare. There was no big launch. I just put it out.

And le Belmont, the funny thing is, there was that Raekwon show there some time back, the first one, and the house was packed. I still find that to be my first real show, like, when I understood this shit. I just literally had Entree out. I had just got my hoodies pressed, I had the Montreal chains, everything, and I had just spent all this money outta pocket. I’m still by the side of the stage, nervous, and when my intro beat came on, I guess that’s when I really felt like I became Full Course. I had this voice that said, like, “You just spent all this money. You gotta go out and sell all this shit.” When I walked out on stage I just thought like, “Yes. This is my fucking show.” I’ve always had that energy at Belmont, from HHK and the Rakim show. It’s home.

CR: I chose to go back again because [owner] Sandro showed us mad love at my first launch there. That time, he kinda gave me like, “I don’t have the Saturday. I have the Sunday; you can have that.” He didn’t know me. After I got there and did the show, he was like, not only did you bring a lotta people, but the vibe was amazing. Real positive people hitting the bar, the music was great, there were no fights, it was an adult crowd. So then he was like, “If you ever wanna do anything again, we’ll work out a Saturday. If you wanna come rehearse, we can work out the time.” Belmont has been real courteous to us, to say the least, and shown love. Why not go and have our people give back? ■