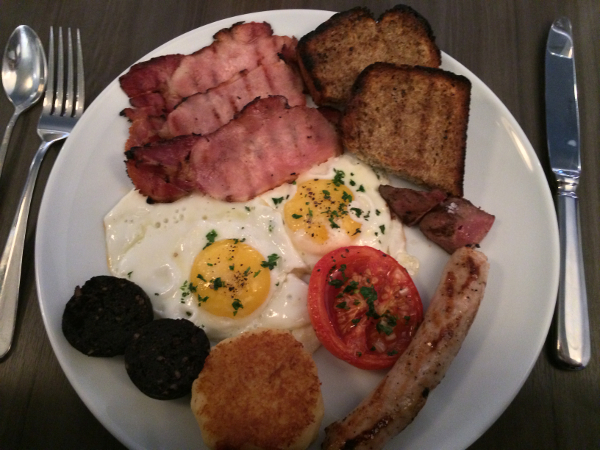 When the powers that be at Cult MTL spent a long night tallying the votes of the Best of MTL survey last May, one category perplexed everyone in the room. No, it wasn’t that Jardin du Cari beat out Caraïbe Delite for Best Caribbean (I mean, really, voters?), but that EVOO placed second in the Best New Restaurant category.

Cult MTLers tend to be pretty hungry people, so it was somewhat astonishing that not a single editor, friend or spouse had heard of the place. We saw that it was on Notre-Dame and assumed it had to be a publicist-driven Old Montreal spot. But then we looked more closely, and noticed that it sits squarely in St-Henri. We vowed to check it out but never did. Until — dun, dun, dun — now.

EVOO’s three owners met while working at the critically acclaimed but now-defunct Old Montreal restaurant DNA. One of them, Peter Saunders, is from Ireland, and the food at EVOO is noteworthy for its combination of the cuisine from that country with that of our fair province. The interesting, moderately priced dinner menu has won mostly positive reviews from La Presse and the pedigreed critics of Yelp, but we went for brunch, attracted by the promise of a real Irish breakfast, other items that seemed way more inventive than the usual eggs ‘n’ bacon fare and the rare offer of an elevated brunch in St-Henri.

If, like us, you hadn’t heard of the place, it may come down to its packaging. EVOO sounds like it should be a water filtration company (maybe because we’ve walked past Mile End’s Aquaovo too many times) and may possibly refer to the Rachael Ray-coined acronym for extra-virgin olive oil. And the less we say about the tagline “cuisine soignée,” the better.

The décor — well, it’s a real turnoff. Think a very purple colour scheme. High-backed, leather-upholstered chairs. Cheap flooring. The decorator was clearly going for “contemporary,” but it just comes off as haphazard, cold and not totally in tune with the times or the neighbourhood.

It’s too bad that the space is uninviting because the food is good. The brunch menu features items like French toast with crispy pork skin, pulled pork and beer foam, and stuffed squash with eggs, shrimp and Béarnaise sauce, among other things. We went for the baked eggs with veal meatballs and the full Irish breakfast. Featuring sunny-side-up eggs, Irish soda bread, a roasted tomato, back bacon, black pudding (made with polenta), piglet liver and a herb-y Gaspar sausage, it’s a dish for only the truly hungry and the truly carnivorous. If you are both of those things, you will love it. The baked eggs, on the other hand, were more more hit-and-miss. It was an interesting concept, and the bacon-veal meatballs were delicious, but the final effect was not dissimilar to a (very good) pasta sauce.

I ordered the ever-changing “cocktail,” which on our visit was a raspberry-basil-gin concoction that was a bit too strong for breakfast (a virgin option is also available) but nonetheless very tasty. I was served an unremarkable latte in an unattractive glass and would have really appreciated the option of filter coffee or the standard Bloody Mary/Caesar.

EVOO invites inevitable comparisons to Lawrence, given the English/Irish influences of their chefs, and though it boasts a much more creative menu (and fewer line-ups) than its Mile End counterpart, it’s just not as charming. The taste level is there where it matters — the food — but the restaurant is really doing itself a disservice with everything else. Still, I’m glad you readers aren’t superficial folk and were able to see past the ugliness to vote in a very worthy contender to the BoM poll. I’ll be back for dinner. ■