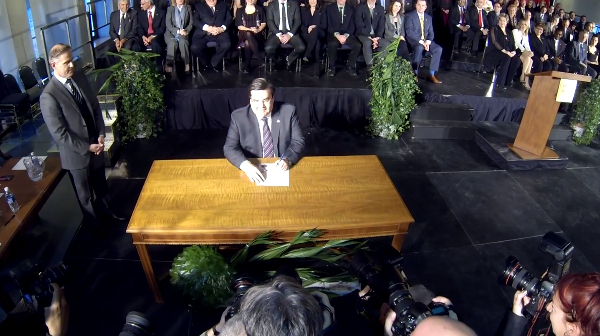 Denis Coderre is sworn in.

So Montreal has a new mayor. Officially. Denis Coderre was sworn in yesterday at city hall, where he pledged to usher in a new era of honesty (with a soon-to-be-appointed inspector general overseeing the bidding process for municipal contracts) and rejuvenate the city’s economy. Oh, and to celebrate our cultural mosaic, which of course runs counter to the Charter of Values, a fact that was not lost on the 700 or so people in attendance.

Coderre also promised swift action concerning the Champlain Bridge, which is falling apart. Earlier this week, a southbound lane on the bridge was closed, possibly for as long as a month, so a beam could be reinforced after a two-millimetre crack was discovered. While Ottawa has kicked down $125 million for repairs, and earmarked $115 million more for the same thing, the bridge is in such poor condition that fixes could run as high as $500 million. Federal infrastructure minister Denis Lebel, who is meant to meet with a group of mayors today, said that the government will replace the bridge sooner than the original target date of 2021, so there’s that.

So Pauline Marois and the Parti Québécois are abandoning Bill 14, a measure meant to reinforce the primacy of French in Quebec. You might recall that the bill, which invoked the ire of the angryphones last spring, would have allowed the government to revoke a municipality’s bilingual status and force workplaces of 26 people or more to adopt French as their everyday language. It would have also given inspectors the power to seize any materials contravening the law — products, menus, whatever else. But because the CAQ wouldn’t get behind it — Diane De Courcy, the minister responsible for it, said that the CAQ’s changes would have stripped it of its beautiful essence — it’s a wrap. So we can all continue arguing about the values charter now.

And, finally, it’s been a rough few days for that other mayor, Rob Ford. He’s been accused of doing blow at Bier Markt, keeping company with escorts, showing up shitfaced to the Garrison Ball, using a racial slur against a cab driver and so on. And then there was his contention yesterday — that his surfeit of pussy to eat at home meant he didn’t say he wanted to eat a staff member’s pussy. But what if all those things somehow cancelled each other out?

Anyway, as of press time, council is stripping him of some of his awesome mayoral power, and Ford is vowing to take legal action. ■