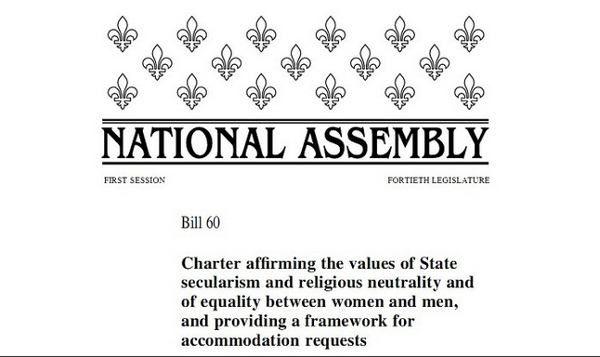 You dudes should really read this thing.

With the election over, and Denis Coderre our incoming king, we’re talking about the Charter of Quebec Values again. Yesterday, the Parti Québécois presented the charter, which has undergone a few adjustments, in earnest. For one thing, it’s been designated Bill 60, and it’s formally (and amazingly) known as “the Charter affirming the values of state secularism and religious neutrality and equality between women and men, and providing a framework for accommodation requests.”

If you’re interesting in reading the whole thing (and not just the convoluted title), you can find the bill here. It does, of course, stipulate that “conspicuous religious symbols” — hijabs, yarmulkehs and the like — may no longer be worn while at work in a public institution. But it also asserts the primacy of the French language. And religious food is now verboten in daycare centres if said food may be on hand to teach children about religion. So if you’re a Jew, you better not eat matzah in front of the toddlers. They might ask questions.

Naturally, a lot of people are angry. Like doctors. And educators. But while Bill 60 has divided even sovereignists, it has done the same to the PQ’s opposition. And whether it passes or not, that was kind of, sort of the point of the exercise, wasn’t it? If it is indeed adopted, however, Bernard Drainville says institutions will have a full year — maybe even longer, though not, like, an indefinite period — to make the changes necessary to adhere to the 28-word charter.

Anyway, Coderre, who inspired a short-lived (though unrelated) meme, is not fucking with it (sorry). He’ll even make the arduous trek to Quebec City to prove as much.

Meanwhile, Rob Ford, he who was caught both smoking crack and ranting violently on video, is considering a trip to rehab. ■