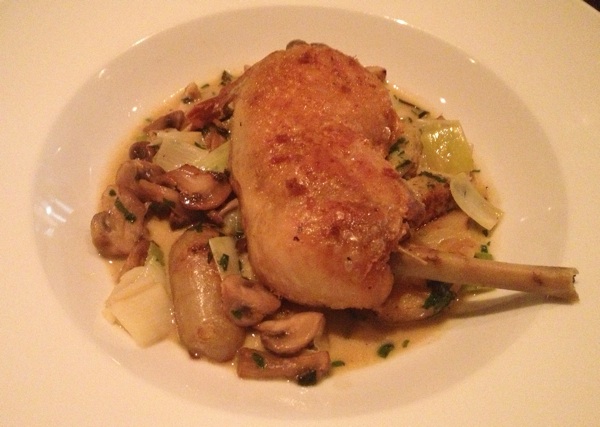 Beaubien street between St-Laurent and St-Hubert has changed a lot over the past few years, mostly to accommodate the influx of new condo dwellers and Mile End refugees forced north by rising Plateau rent prices. And by “changed,” I mean “gentrified,” for better or worse. Generally, this is cast as A Bad Thing, but it’s hard to hate on the strip’s new generation of foodie-baiting businesses like Gus, Vieux Vélo and new addition Bistro Lannes & Pacifique.

The latter is the latest offering from chef/restaurateur Marc-André Paradis, owner of les Héritiers, le Smoking Vallée and Monsieur B., among others, who has established the gourmet BYOB as a winning business formula. The recently opened bistro offers French-inspired cuisine with a focus on seasonal market produce, either à la carte or as part of a five-course tasting menu. 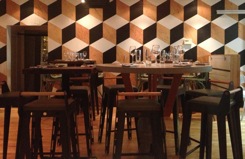 At first blush, the décor looked a bit yuppie-aspirational — sleek pale wood, modern furnishings and lighting, chalkboard menus and lots of glass. But once we settled in to eat, the space felt warm and inviting, and the service struck that delicate balance between attentive and cloying.

To start, we had a small basket of their home-baked bread ($3), a house specialty, opting for a dark and thinly sliced olive oil and black pepper loaf, which we found a welcome change from the baguettes and Italian white breads that are the local norm. For appetizers, we tried the risotto and a fingerling potato and mixed mushroom salad topped with an egg sunny side up, diced radish and a generous sprinkling of ground pepper. The emphasis on seasonal produce shone in the salad, which was filling without being heavy, while the creamy risotto was satisfying enough without being spectacular. 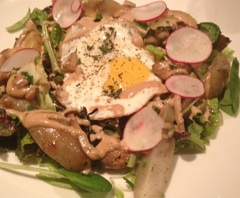 As a main, I went for a crusted chicken thigh served on a bed of leek, mushrooms and Jerusalem artichoke in a creamy velouté. Again, the dish felt timely, making the most out of what’s in season with smoky, earthy fall flavours that paired perfectly with the juicy meat, and the kick of the peppery bread paid off while sopping up the last bits of creamy sauce. My dinner companion chose the cod tikka masala, which knocked it out of the park — a generous filet of seared fish, served on a bed of curried vegetables and lentils with yogurt that we both agreed was the star dish of the evening.

The food is a step up in price from much of what’s on offer in the neighbourhood, with appetizers ranging from $8–$10 and mains hovering between $22–$25, but since it’s BYO, the total is still far less than you’d normally spend on a decent dinner out. The portions are generous, so as long as you’re kind to yourself at the SAQ, Lannes & Pacifique is a great spot to spoil your palate without spanking your wallet. ■

Lannes & Pacifique
200 Beaubien E., 514-439-1001
Booze: bring your own
Vegetarian-friendly: not very
Wheelchair accessible: one step up