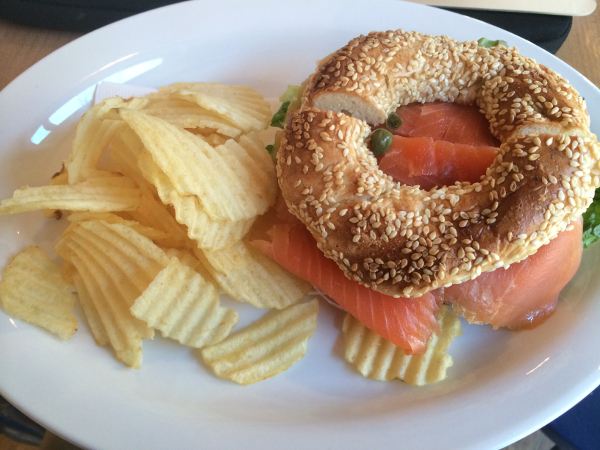 I hate to admit it, but Facebook ads work. A “sponsored post” stopped me in my virtual tracks last week with a catchy slogan: “Montreal’s first bagel sandwich shop” — or something to that effect. We really don’t have a bagel sandwich shop, I thought wondrously, thinking back to the many times I’ve wanted to mosey into Fairmount or St-Viateur for a sandwich only to remember they just don’t do that. (Well, Fairmount will make you a lox sandwich, but it takes them forever and you feel the other customers glaring at you behind your back, so it’s an overall unpleasant experience. Also, I realize that the St-Viateur cafés not located on St-Viateur actually do prepare sandwiches, but I totally fell for this piece of social-media marketing, and, anyway, the more bagel shops, the merrier, right?)

It’s called Hinnawi Bros Bagel & Café (372 Sherbrooke E.; 514-289-4000), and, yes, it sells bona fide bagel sandwiches. According to this article, the owner spent time in California and wondered why Montreal, a city so famous for its bagels, was so devoid of the bagel sandwiches that are bountiful in the lower 48. I walked in expecting to find the kind of bagel shop I grew up with in suburban New York, complete with vats of different kinds of cream cheeses (why does no one here make a good scallion cream cheese?), smoked fish, cold cuts and other sandwich fixins — on Montreal bagels, of course.

Hinnawi wasn’t quite like that. Still, there was a definite American tinge to it, with its quick service, chocolate ring cake and variety of sandwiches. I tried the l’Alaska, the classic bagel ‘n’ lox deal, and a tuna/cheese/lettuce/tomato ‘wich. The former came with two fatal flaws: lettuce and a side of potato chips that would have best been omitted at 8 a.m. But everything else was solid, and the tuna made for a nice lunch. There’s no filter coffee (another flaw in my book), but my Americano satisfied the urge, and the shop also sells delectable-looking baked goods that look like they come from the nearby Mamie Clafoutis.

Located on the southwest corner of St-Denis and Sherbrooke, it’s ideally located for UQAM students, and has the WiFi and ample seating space required of any study spot worth its salt. If I lived around the Latin Quarter, I’d be there all the time for a cheap lunch. But for the record: I still think the famed Mile End bagel joints should get on the sandwich game, purity be damned. ■