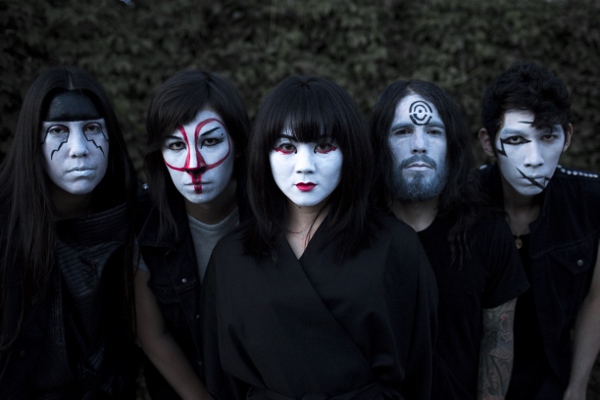 WHAT: In their own words, Yamantaka // Sonic Titan is an “Asian, indigenous and diasporic art collective.” They started out playing amid installations in galleries and have since produced a rock opera (33) and embarked on the creation of a video game (YOUR TASK // SHOOT THINGS). In 2011, they released an LP (YT//ST) and will do so again at the end of this month (Uzu). So you could call them a band.
WHO: Ruby Kato Attwood, Alaska B, John Ancheta, Ange Loft, Brendan Swanson, Aylwin Lo.
WHERE: Montreal and Toronto.
WHEN: Since 2007.
WHY: Their compelling live presentation, the artful heft of their “noh wave” sound (a nod to both no wave, the heavy post-punk scene that emerged from NYC in the late ’70s, and noh, the traditional Japanese opera style) and the brains behind their multidisciplinary concept make this project impossible to ignore.

Lorraine Carpenter: Tell me a bit about the sound of the record. Is there anything that particularly inspired or influenced the music?
Ruby Kato Attwood: We were pretty inspired by Queen this time around. We had a bit of a moment with Freddie [laughs], where we were like, “Oh, my God, he’s still the thing I love the most!” There’s still some, like, Baroque stylings. There are a couple of ballads. It’s very sad. If the last record was situated within our personal mythscape that we’re creating, that was more about different planets and different peoples. This is about an interior space, an emotional investigation. So if the other record was about the cities and the planets, this one is really more about the people inside the cities. We’re investigating what the emotional challenges are of the characters we’re creating and what dynamics they present, and I have to say, the songs are sad [laughs].

LC: What can we expect from the new live show?
RKA: We have some surprises in store that I don’t want to divulge, but our dragon puppet is retired, ’cause he is old and he suffered some injuries on tour. Our presentations for the audience and our more interactive stuff is a little different. We’re working on a midi light system that will be triggered by the music. And this time we’re not going to be touring with as much cardboard. It’s very, very difficult, so we’re hoping to use more projections with our new lighting system to create an atmosphere in that way.

LC: I’m curious about the indigenous aspect of your collective, which is on display with Iroquois vocals on the song you’ve released from the new record, “One.”
RKA: Yes. Well, Ange Loft, the other singer, composed those lyrics, and Jonas Gilbert, who is another member of the Mohawk nation, was featured on the recording of “One,” singing.

Our main focus is mythology, and we’re really interested in stories and how they’re told and how they’re understood and how they change. So Alaska and I approached the project as members of an Asian diasporic community. We approached that sort of as this idea of being Canadians, but also being sort of considered immigrants. And we never really meant to form a pop band—I hesitate to say pop, but, you know, a band that gets a review on Pitchfork or whatever. It was strictly an art project, and you can’t really talk about diasporic people of Canada without talking about aboriginal people of Canada. For us, it’s just about repositioning ourselves in relation to cultural stereotypes. We decided to really take it into our own hands and to say no. Even for me, like, you think of Japanese-Canadians or Japanese people—well, maybe not you—but somebody might think of a geisha or a ninja, but, you know, I’m third-generation Canadian, and I grew up on a farm in Ontario. I didn’t have access to that. It’s really about acknowledging that as musicians we’re going to be categorized in this way because of the way that we look and the communities that we come from, and so we might as well just start there.

LC: I have to ask you about the Quebec Charter of Values. What’s your reaction?
RKA: It’s shameful. I mean, look at the atrocities that colonialism put on native people and on a lot of European immigrants—Polish, Irish, Scottish people who worked very, very hard and were very poor, and French people, too. To see this group of people [Muslims] who are so diverse and come from such sorrow and suffering… I mean, why can’t we offer some kind of relief? This is perpetuating a suffering that has been so longstanding in this country, and it’s sad that we still can’t move towards some kind of understanding, even with all of our communications technology and education and, you know, hiring equity, that it’s still a matter of “My god’s better than your god.” It just seems so petty. I studied Christianity and Judaism, and the thing that bothered me the most is that the sentiment of those laws is deeply against the Bible. And leaving that cross up in parliament, like, come on. It’s terrible! It’s very, very sad and I’m shocked, honestly. It’s like it’s ruined me.

On a lighter note, and maybe this is just reverse hyperbolic discourse, but I don’t know if you’ve ever seen a Sikh mountie, but it’s scary [laughs]. Like, I want that person to save me. The guy with the ceremonial dagger. ■