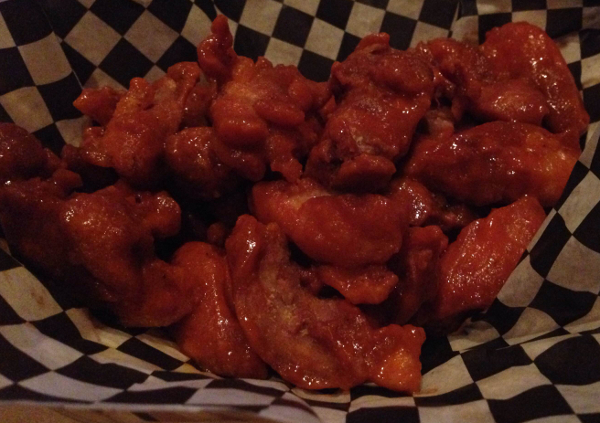 Venerable chicken wing joint Wings ‘N Things is getting a second reboot, and here’s hoping this time it sticks, because, really, where are you going to go for chicken wings in this town? There were three locations up until the early ‘90s, followed by a first comeback attempt in 2012, which closed earlier this year.

But at the end of September, Wings ‘N Things re-opened yet again, this time a few paces down the road on Royalmount, surrounded by offices near where the Decarie and Highway 40 meet (walking distance from De la Savane metro).

It’s a family restaurant, so expect crayons to go with the knives and forks at every table (who doesn’t enjoy doodling on the paper table-covering before a big meal?), plenty of televisions for sports watching and fast, friendly service. The new location is actually a coffee shop during the day, so Wings ‘N Things is only open for dinner from 5 p.m. on. The last time I went to one, I was five and had no discernable palate to speak of.

Now, the wings, as you might expect, are the way to go. Your best bet is to order whatever multiple of six you can handle, get them flavourless (but not boneless: I had them, and they were fine, but it’s nice to have something to hold onto) and ask for the assortment of six sauces. They range from the obvious buffalo of varying degrees of spiciness (the Under the Table is their five-alarm equivalent, although it wasn’t too hot) to peanut butter and garlic butter, which Hunan-dumpling-ify and lobster-ify your wings, respectively. There exists great potential with this mixing and matching of flavours, since a meaty wing can be slathered in just about anything without losing its essence. The wings weren’t those new, massive steroid-infused types found at your local supermarket, so don’t be afraid to order a lot.

Beer-wise, they have Moretti and Red Stripe in bottle at six bucks per, and they’re appropriately light choices given the sauciness and spicyness of the meal. Besides wings, there’s a maple glazed bacon and gruyere cheese sandwich, a Kiwi burger (with pineapple, among other condiments), nachos and pad Thai, strangely enough, while in terms of sides, the waffle fries made for good dipping (as would have the Curly Q fries).

Wings ‘N Things is sports/family resto fare, but given the flavour possibilities with the wings and the overall higher quality of grub, it’s already ahead of the usual sports bar pablum. ■