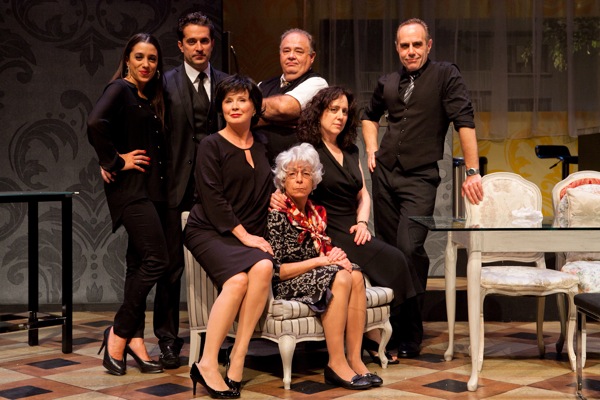 The cast of The St. Leonard Chronicles. Photo by lucetg.com.

Life’s just a bowl of tiramisu for these young, upwardly mobile Italians. In black pants and tight shirts, Terry (Christina Broccolini) and Robert (Guido Cocomello) are making more money than their working class families ever did. In their St-Leonard duplex, three generations come together for ravioli and homemade wine to celebrate a double 60th birthday dinner. Terry and Robert have even bought their respective parents tickets to Miami. Ah, but family secrets gnaw at traditional solidarity like beetles on a tomato plant. While Terry and Robert think announcing their plan to move to Beaconsfield is going to spoil the meatballs, they’re about to find out that everyone has got a past uncomfortable enough to cause indigestion. Get out the Pepto Bismol.

Mambo Italiano playwright Steve Galluccio’s The St. Leonard Chronicles reunites cast members from 2009 In Piazza San Domenico, giving the actors a certain trust and freedom that allows them to expand on stage. The lines are fast and funny as Galluccio nails the Italian stereotype in its many variations with loving humour and a bit of over-the-top caricature.

Montreal references (notably: “ville de merde”) are crowd pleasers. Easy to love for her senile irreverence, Grandma Dora (Jocelyn Zucco) reminisces about the welcome she got from her Québécois neighbours while moving in (“Maudite Italiens!”). Miami is rejected in favour of go-to summer vacation spot on the Jersey Shore, Wildwood. Carmine (Michel Perron) and Elisa (Ellen David) square off against Dante (Vittorio Rossi) and Gina (Dorothée Berryman) when assessing the best neighborhood: Ville Émard or Little Italy. Supermarkets might be the deciding factor.

For all its great jokes and energy, the show seemed a little wobbly on its feet. First night problems, I suppose. While things generally moved at a good clip and everyone seemed solid in their roles, there were moments of disconnect where the words didn’t seem to carry their full potential. More should have been done with Carmine and Gina, as their conservative insecurities about a life spent playing it safe is the perfect foil for Elisa and Dante’s troubled marriage.

Luckily, great dialogue and strong characters effaced weaker moments, and many in the crowd seemed attached to the narcoleptic Nana Dora with her insightful senility. Personally, I thought the best chemistry was between hot-tempered Terry and sensitive beefcake Robert, who solved their disagreements with lips locked, bodies entwined and mots de l’amour like “I’m going to screw the St-Leonard out of you.”

The play does contain deeper messages about life’s brevity and the value of forgiveness that people of all ethnic stripes can connect with. Dora’s delivery of her life’s wisdom (or lack thereof) by digital tape recorder allows the humour to continue without an excess of schlocky emotion. For those with tuggable heartstrings, keep some Kleenex at the ready. The ending comes fast, perhaps too quickly and easily for my taste, but this is less a naturalistic portrait than a celebration of heritage and community. Overall, The St. Leonard Chronicles is enjoyable for its humour and its universal themes. ■