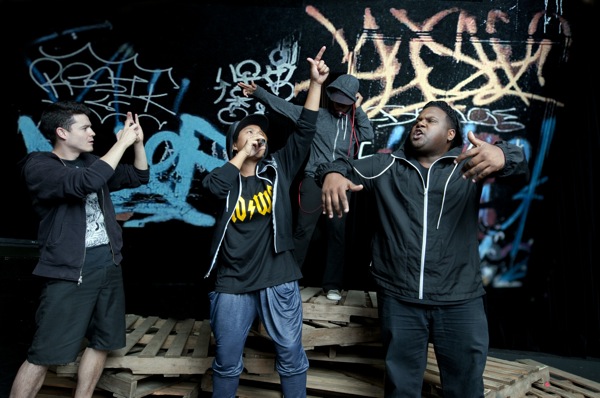 Cast of The Lamentable Tragedy of Sal Capone. Photo by Andrée Lanthier.

In an unnamed city on the eve of an album launch, Sam-I-Am, DJ and star of the up-and-coming hip hop group Sal Capone, is shot in a sketchy neighbourhood. The remaining members of Sal Capone struggle with the sudden tragedy. Is Sam-I-Am a victim of police profiling? Accidentally in the wrong place at the wrong time? Gang violence? Jealousy and rivalries in the scene? Or none of the above?

The Lamentable Tragedy of Sal Capone explores the complex reasons why too many young people of colour find themselves on the wrong side of a loaded gun.

“The play was inspired by the shooting of Fredy Villanueva that took place in 2008 in Montreal North,” explains playwright Omari Newton. “I saw the news and had so many questions about how these situations kept happening and how youth of colour find themselves in these situations with police. It’s not always a simple case of racist cops hunting kids. I wanted to explore why this is the case.”

The play doesn’t aim to recreate Villanueva’s story. “It explores why there is a genuine distrust between inner city youth and the police,” Newton says. But beyond that, “It’s a love letter to hip hop music and culture.”

Reflecting on his exposure to Public Enemy — “where art and politics merged” — Newton recounts his roots in Montreal’s hip hop scene. He was a member of the now-defunct acid-jazz group Kobayashi.  “I started as a rapper, MC-ing,” he explains. “I was inspired to do spoken word by Def Poetry Jam. Hip hop was a huge part of my life growing up in Montreal.”

The ethnic diversity of characters in the show also reflects his experience of Montreal. “When you go to the theatre, usually it will be an all-black, an all-white or an all-Italian cast. That’s not the Canada I know. I wanted the diversity I felt growing up reflected on stage, as well as how that diversity and multi-ethnicity was a non-issue for us. We were cool with different people.”

In the play, the four members of the group are all of different ethnic backgrounds. Lead rapper Freddy Salazar Jr. (Tristan D. Lalla) is Trinidadian, hype girl Jewel  (Kim Villagante or k!m possible) is Filipino, manager Chase (Jordan Waunch) is Italian and the ever-watchful eyes of the street are represented by a transvestite of Cree descent (Billy Merasty).

The diverse cast was involved in creating the play. “Kim and Tristan are so phenomenally gifted,” Newton says. “They not only acted, but wrote a lot of their own lyrics. The play was changed because of the actors. Jewel began as a Korean male part, but changed because of Kim to be true to her story.”

Lyrics? You heard correctly. You can’t have a hip hop play without music. “There are four songs performed,” says Newton. “There’s scratching and samples and hip hop beats throughout the play. It’s not a musical. I wanted to use all the elements of hip hop culture.”

Newton reflects on how uninformed perceptions about hip hop culture often lead to assumptions about criminality. “The play talks about the baggy pants and the hoodies, the swagger, the way the kids carry themselves,” says Newton. “Hip hop culture emulates gangsters and criminality. It must be difficult for police officers with the crime profiles they get. Ninety-five per cent of kids who listen to hip hop music fit that profile. You’ll hear a crime is committed, and the description is that it’s a kid wearing a baseball cap and a hoodie.

“What’s interesting is that when I started writing the play, I was wondering if it would still be relevant by the time it made it to the stage. Fredy Villanueva was shot in 2008. Since then, there have been a number of high-profile cases that are similar — Trayvon Martin was shot by an authority figure, and Oscar Grant in California.

“I wish the subject matter wasn’t relevant today. I wish people were like, ‘That never happens,’” he says.

Mainly, though, Newton says, “I would love to get out that hip hop is a culture and not just a music or kids trying to emulate gangsters. Hip hop has its own mythology and rules. There’s a line in the play where Freddy says, ‘Do you think Martin Scorsese is responsible for the Italian mafia because he writes mafia movies?’ No one holds him accountable for mob violence. But 50 Cent and Jay Z, who paint violent pictures with their art, are seen as responsible for criminality. Hip hop is a culture and an art form. I’m not letting hip hop entirely off the hook, but there’s a lot of ignorance around it.” ■