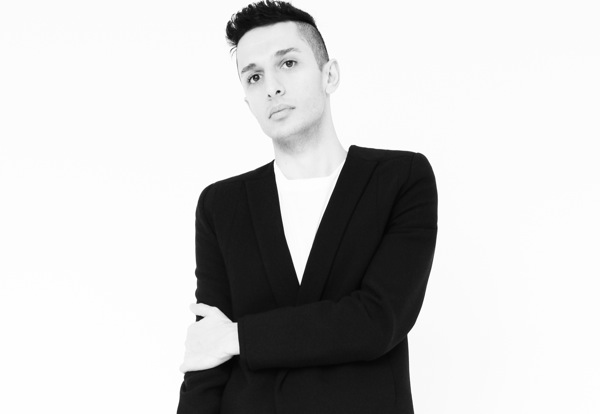 “I don’t see myself as a fashion designer,” says Rad Hourani, creator of an eponymous line of high-concept, flawlessly tailored unisex clothing. “I’m interested in a really complete vision, aesthetically, that is related to art, music and style — but not fashion.”

Hourani’s the latest creative icon with local ties invited to occupy the Phi Centre, guest curating a month-long series of music, fashion and art events using the centre’s considerable space and resources. In past incarnations, designer Renata Morales conceived a week-long playland, while Pop Montreal harnessed the centre as a creative haven for artists. Vice co-founder Gavin McInnes and filmmakers Xavier Dolan, Godfrey Reggio and Denis Villeneuve will each take the reins over the next few months.

“I’ve been wanting to do something here for the past six years; it just never felt like there was the right concept. I didn’t really want to just do a show,” Hourani says. “I think all of the senses have to be stimulated.”

This devotion to multimediality is apparent in his programming, which blurs the boundaries between senses, genres and media. Throughout the month, the centre houses Seamless, an exhibit of sketches, anatomical drawings and photographs of Hourani’s designs and creative process, to celebrate his label’s five-year anniversary. The show includes the interactive jacket he designed for a Tate Modern exhibit — loaded with digital cameras, it captures video images of the visitors looking at it, projecting them onto screens around the gallery space.

Hourani has also established a pop-up boutique stocked with his creations co-created with architect Gilles Saucier, painted works by Leela Sun and Renata Morales, swag from participating musicians and copies of the gorgeous limited-edition coffee table book the Phi Centre published to commemorate the residency, filled with Hourani’s black-and-white photos of each look presented over the label’s five years.

He’s also lined up interactive showcases of two beloved local musicians. Pierre Lapointe will play a few of his very saddest songs in the midst of the audience, with a backdrop video projection created for the event by Hourani (Nov. 14). The month-long residency closes out Nov. 29 with a performance by local music producer Jacques Greene, who will don the interactive jacket to screen images of the audience back to themselves during his set.

NO LIMITS
Refusing the designer title is in line with Hourani’s philosophy and aesthetic, which aims above all to shatter the boundaries that inevitably come with labels, which he sees as unnecessary limitations on creativity.

“I’m not trying necessarily to de-gender people. What I’m doing is creating an object that’s free of any limitation: gender, age, time reference from the past, etc. So by doing that, I’m allowing people to take these pieces and adopt them in their own life,” he explains. “I want people to adopt it to their own style, and every style possible.”

While he describes his clothing as unisex, timeless and ageless, he also rejects the term androgyny, which is often applied to his work: “I don’t want them to look androgynous or asexual. I show it on the runway [as] more of a neutral look to be able to give the message free of all limitations, and then from that people can go to masculine and feminine.

Hourani is primarily known for his clothing line, although he says that his first loves were photography and film. As we speak, he repeatedly underlines that while he works with clothing as his medium, he prefers to disassociate this from fashion, per se.

Clothing, he explains, is “the first thing you use to express yourself, in a way, the first thing you put on yourself to leave your house,” and he says one of his major motivations, initially, was to create clothing that he himself felt comfortable wearing.

“It’s the most focused and honest process when you design something for a purpose, and above all for yourself. I think when you do that, there’s a precise style and identity,” he explains. “The way I do it, it’s really a reflection of who I am. I think that has always been my main inspiration: what I want to wear. What pictures attract me, what shapes I’m interested in, and I think that comes out. It’s like asking me who’s your muse, and it’s always me.”