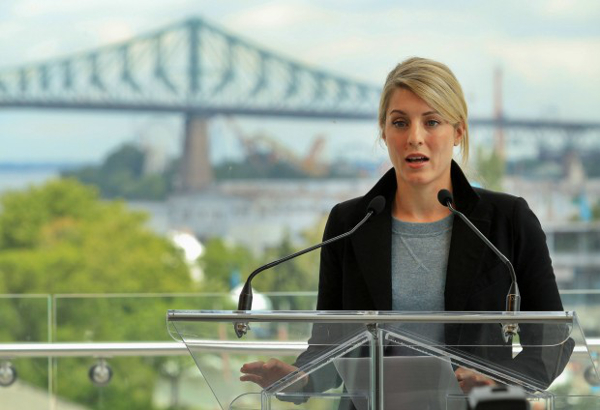 Mr. Coderre, I have good news, and I have bad news.

The good news? Only 36 per cent of Montrealers questioned in the most recent CROP poll feel they know dark-horse mayoralty candidate Mélanie Joly.

The bad news? Almost half of those say they would vote for her. You better hope nobody else discovers that she’s running.

Denis Coderre, who has been campaigning for the job of Montreal mayor ever since Justin Trudeau crushed his hopes for the federal Liberal leadership, is still at the top of the poll with 41 per cent support. Joly has pulled into second with 24 per cent, ahead of the much better known Projet Montréal candidate Richard Bergeron (21 per cent) and the fast-fading Marcel Côté (11 per cent).

Even people who say they don’t really know Joly say they have a favourable opinion of her (70 per cent), allowing her to beat out Coderre (65 per cent) in this category.

With a little less than three weeks to go before the Nov. 3 vote, the CROP poll suggests that Joly’s growing popularity is mostly coming at the expense of Côté. In fact, the dark-horse label has shifted to Côté in the wake of his own mini robocall scandal, when a firm specializing in automated telephone polling failed to tell the first batch of respondents that Côté’s party was paying for the survey.

That’s a minor no-no under Quebec electoral law, for which Côté was slapped on the wrist. More disturbing to me, and a lot of other Montrealers, it seems, was that the “poll” was, in fact, an attempt to sling mud at the Projet Montréal and Coderre camps. Respondents who said they supported either Coderre or Bergeron in the poll were subsequently asked questions designed to create doubt about the honesty and credibility of their respective parties.

The American-style negative campaigning — combined with the pretense that this was a poll designed to gauge public opinion (rather than a cheap attempt to mould that opinion) — left a bad taste in a lot of mouths. The man who promised to rid the city of old-style politics was resorting to its nastier tactics right out of the starting gate.

So I think you can safely scratch Marcel Côté from your race card.

If you watched any of the debates in which all four front-runners participated, you shouldn’t be surprised that Joly is coming across as a much more sympathetic candidate.

Despite Coderre’s image as a populist, he is wooden when placed in front of a podium. Even surrounded by more than 2,000 supporters at the Palais des congrès last night, the man barely cracked a smile and looked as comfortable as someone waiting for a colonoscopy. Worse, he’s a name-dropper — and that name is Coderre. “When I was minister of immigration” and “when I was minister of amateur sport” peppers the speeches of the guy who spent five years in the federal Liberal cabinet. We get it. Coderre’s handlers have obviously told him to stress his experience, but it just makes him look like a pompous little braggart.

Richard Bergeron, who has the advantage of leading an established party with grassroots membership and a comprehensive platform, is failing to catch the public’s imagination in his second attempt to become mayor. Although he’s obviously much better informed than the competition, it’s not coming across in a sympathetic way. The image that leaps to mind is the cat who caught the canary. He is an urban planner by training and is confident he’s on the right path, but he relies too much on his expertise and not enough on selling his ideas. In a meeting with the La Presse editorial board, for example, he had this to say about his proposal for a tramway to improve public transit: “I dare say the best expert on these things in Quebec, it’s me. I’ve worked on it for 14 years.”

I’m tempted to label this the Doré disease. Like former mayor Jean Doré, Bergeron is intimately familiar with the intricacies of all of the major dossiers. That’s a great trait for a bureaucrat, but it’s no replacement for leadership.

Joly’s public performances have been marked by seemingly casual confidence as she looks into the camera and speaks conversationally while her opponents constantly glance down at their lists of talking points. It doesn’t hurt, of course, that she’s young (34), a woman and attractive. It would be foolish to think those are the only traits that have gotten her this far, however. She’s an Oxford-trained lawyer who did a CBC internship in journalism and became a managing partner in a public relations firm. She was also an organizer in Justin Trudeau’s Liberal leadership campaign.. Her CV includes participation in numerous private and public boards, and both Elle magazine and Les Affaires identified her as one of Quebec’s top women leaders when she was still in her 20s.

But Joly has yet to be truly tested on the political stage. Until now, she hasn’t been perceived as a serious threat, so the boys haven’t really bothered to rough her up much. That has certainly helped public perception, but now we’ll get to see how she performs under pressure. There are definitely lots of pressure points to be exploited, from the thinness of her electoral platform to the dearth of experienced candidates on her slate.

The one thing that’s certain is that after months of disinterest, this has suddenly become a race worth watching. Only 27 per cent of people in the CROP poll say they’ve made up their minds, but an astonishing 54 per cent say they’re sure they’ll be voting (last election saw a 36 percent turnout).

So with half the mayoralty votes still up for grabs, Coderre might be right in downplaying his lead. Whether he gets good news or bad news on election night is still very much up in the air. ■