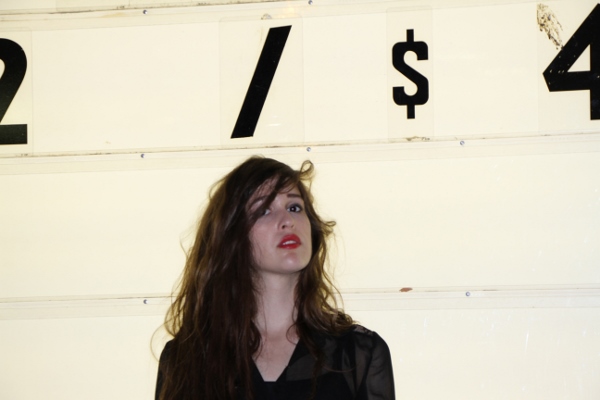 You may know Marie Davidson. Born and raised in Mile End, the francophone (but perfectly bilingual) musician was a member of the collective that operated and worked at the recently shuttered secret music venue la Brique (RIP). She played keyboards and violin with les Momies de Palerme, the abstract experimental duo who released an LP (Brûlez ce coeur) on Constellation Records. She also played synth with dark electro disco project DKMD, and remains half of the guitar ’n’ vocal duo Essais Pas, with her husband Pierre Guerineau — they’re embarking on a European tour in November.

But lately the project that has gained her the most notoriety is simply Marie Davidson, a solo endeavour that has produced a self-titled EP, released on cassette by Austin, TX label Holodeck. The sound ranges from eerie and brooding to threatening and manic, evoking classic soundtracks of the late ’70s and early ’80s.

“It’s all electronic — that’s how I developed my language,” Davidson says. “I started experimenting with electronic gear that I didn’t really know how to use: sequencers and synthesizers and drum machines. There’s no computer, which is rare for electronic music, and no acoustic instruments.”

Davidson’s voice is present, too, but unlike her vocal contributions to other projects, she speaks rather than sings at least half of the time. “It’s based on personal feelings, but they’re magnified. It’s not about my everyday existence. I talk about things that I’m not able to talk about in real life, like inner crises and fantasies — it’s mostly dark, dark fairy tales. It’s very cathartic.”

Holodeck Records co-founder Jon (his last name is secret) discovered Davidson when she opened for his band Silent Land Time Machine last fall. It was only her second show. “It was fresh, it was new and there was urgency in the music because when I started this project, I was going through a depression and I needed to do something to get it out of my mind. The newer songs are more mature; at that time it was more fragile and innocent, and darker.”

Davidson has been busy recording not one album but two: the first, Perte d’identité, will be released in Belgium, and the second, tentatively titled Persephone, is for Holodeck. Both will emerge in the first half of 2014. She’ll be previewing some of this new material at her headlining show this weekend, part of the Phenomena Festival. For the occasion, her husband, Guerineau, will play guitar and synths, leaving Davidson hands-free to perform in front of projections she shot with experimental videographer Jean-Frédéric Noël.

As she acclimatizes to revealing her inner world in the spotlight at centre stage, getting theatrical is a logical next step. “At my first shows, I was terrified but excited also. I’ve never felt this kind of excitation before. I’m someone who holds back a lot and is very introspective, so for the last six years I’ve been on stage but always holding back, not wanting to show too much. At some point, I was like, ‘Fuck it!’ I had so much in my head that I had to get out. And finally it became so much fun. It’s not just relief. It’s more than that. It’s like you open this door and step into another world.” ■