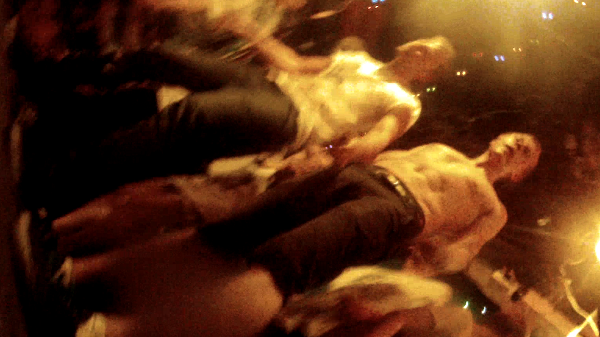 Local filmmaker Mitchell Stafiej’s film Found will be premiering at the Festival du nouveau cinéma this week. The fest, which doesn’t shy away from innovative or experimental filmmaking, is a good home for the flick, which was created on a tiny $2,500 budget, using solely new consumer camera technologies.

The film is a series of long takes, seven in total, which give the viewer a glimpse into the lives of a family dealing with their grief surrounding the kidnapping of a young woman named Julie.

I caught up with Stafiej to ask him about his process and the difficulties he encountered while creating his non-traditional film.

Kayla Marie Hillier: How did the idea for Found come about?
Mitchell Stafiej: There’s a documentary called 102 Minutes That Changed America about the 9/11 attacks that features a shot of a camcorder facing a wall in an apartment. We don’t see anything but the wall and the occasional foot in front of the lens. But we hear this tremendous chaos happening outside of the frame; people screaming, alarms going off, crying. The shot had so much power but we didn’t see anything. I was so amazed by that one simple shot in the film and the idea basically stemmed from that.

KMH: How did you decide on the structure — the long takes?
MS: I think the long takes create this struggle between the audience and the film. They want a cut; they don’t want the camera to go out of focus and they want actors to be more visible. So they’re fighting in their minds against what’s happening in the film until they give up. Weirdly, it makes the film more engaging I think.

As for as the order of all of the long takes, that was something that took my editor, Dan Dietzel, and I a while to figure out. I wrote the film with a specific order in mind but it turned out that it didn’t flow in the editing room. So we would stay up all night and keep trying and trying new orders without success. After showing different cuts to some friends, I finally got an answer. A colleague of ours just wrote out an order on a slip of paper and handed it to me. We tried it out and it worked perfectly. We bookended the film with images of a camera breaking down, almost like the birth and death of the uncredited actor — the camera. It just seemed to work, so we called it a day and we were happy.

KMH: Did you struggle at all using new technologies vs. traditional filmmaking? Why did you make the decision to film this way?
MS: The simple answer would be to say that we wanted to stay authentic to what people would actually film themselves within those sequences. But really, I wanted to present the camera as a character. For me, the only way to do that was to use cheap cameras that each have distinct qualities. Cheap cameras have tremendous “autofocus” that high end cameras don’t. By having that focus change at will or to see the white balance change or to see a lot of grain reminds audiences that they’re watching the film through a lens. It reminds them that they’re watching a film. Why are they watching this film? Who shot it? It’s also just an aesthetic that I love. I think it looks so real and distinct that I sometimes wonder why people don’t use that aesthetic as much — I just love it.

It was great to use these technologies because it’s something my crew and I all understand. We’ve been using them and watching them evolve since we were kids. I think it was a struggle sometimes to accept that the scene was just going to look like shit because we were shooting with an iPad or an iPhone. But once we accepted that fate, we were able to move on and focus on other, more important aspects. For me, a camera is a camera and whether you’re shooting with a shitty iPhone or a RED, you’re still creating something — and that’s pretty cool. ■