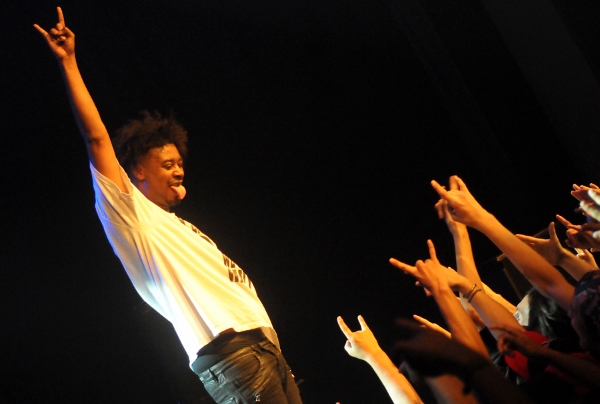 A great many American rappers have had a terrible time trying to cross the border to play shows here, but none in recent history have seemingly had it as tough as Detroit MC Danny Brown. After previously cancelling his Montreal engagement with New York’s Action Bronson — his third failed attempt at coming here — a last-second hail mary of paperwork found the endzone, and suddenly, with only a few days’ notice, Brown was miraculously able to hit our native land.

So given the bureaucratic backflips that led him to finally gaining entry into Canada, coupled with the last-minute nature of his rescheduling, there was an added sense of excitement to last night’s show at Telus Theatre. Action Bronson performed first, taking a stroll through the crowd and into the balcony for a sweaty rap circle amid his adoring fans. He was in fine form, but understandably overshadowed by the anticipation of Brown’s set.

After a brief interlude where the DJ spun ubiquitous party rap, Brown emerged in tight jeans and a loose-fitting white T-shirt, with frazzled fro and his tongue outstretched, revealing his trademark missing front tooth. He was smiling upon arrival and didn’t let up, not making any real reference to the momentousness of the occasion, besides his intention to smoke blunt after blunt until slipping into a kush coma (they’re also both songs of his, from different records, but an obvious fit).

He played a few cuts from his 2011 hit album, XXX, most notably “Radio Song” and “Monopoly” (complete with Doritos bag prop). He also performed Evil Nine’s “The Black Brad Pitt,” where he’s featured, to the crowd’s delight. Another set highlight was his ode to the ladies in the audience, the more electro, non-album track “#ExpressYourself,” a song that unfortunately won’t be appearing on his upcoming album, Old. He rapped in an aggressive, hyperactive, high-pitched manner, and his flow was as rabid as on record. The set ended abruptly, and there was no encore, even though the crowd stuck around for a bit afterwards, clearly wanting more.

Brown’s odyssey in trying to get here was obviously the main story of the night, but he also proved with his tight set that we weren’t waiting on a stiff either. He’s one of rap’s most dynamic, eccentric voices, and someone worth checking out again once Old drops. ■