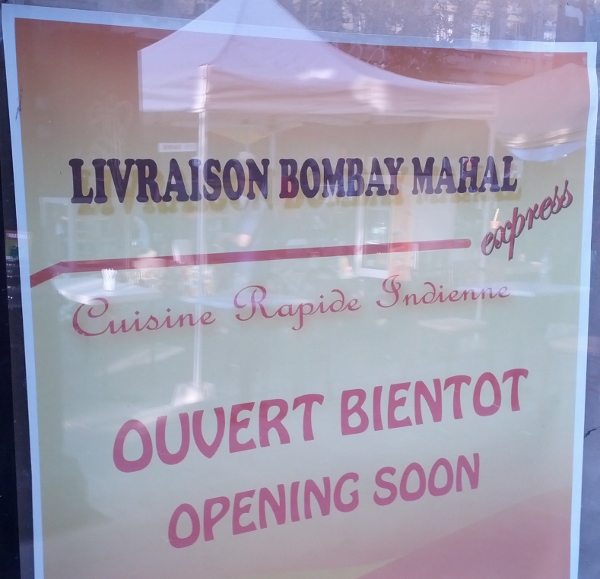 The window tease, up since August

Finally, party people on the Main can indulge in late-night cuisine that the British have been absorbing their booze with for decades: curry.

One of the most popular Indian restaurants in Parc Ex (check out how they did in our Best of MTL survey here), Bombay Mahal, is opening an outpost on the Main (3681 St-Laurent, corner Guilbault), a 12-seater with a take-out counter and delivery via À la Carte Express.

“We want to initiate a fast-food concept for Indian food, something that can compete with a lot of other popular franchises,” says Bombay Mahal manager Ahsan Tufail, who calls the long-planned expansion “instinctive.”

“Most of our customers [in Parc Ex] are from the Plateau anyway,” he adds, “and St-Laurent nightlife has had a boom recently.”

Bombay Mahal Express will serve dishes à la carte ($4–$11), as well as thali plates ($6–$9) all day, and into the wee hours, until 1 a.m. on Thursdays and 3 a.m. on Fridays and Saturdays. So instead of drunkenly settling for hot dogs, poutine and bad pizza, you can now opt for samosas, jalfrezi veggies, tikka masala chicken or (if you dare) lamb vindaloo. But will this new location be as reliable as the original?

“It will be a limited menu, but the food is going to be the same,” Tufail says. “We hope to provide the same taste.” ■