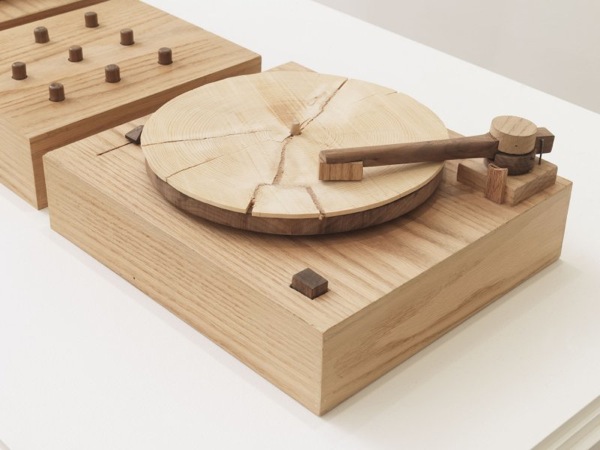 A pounding pow-wow beat is the first thing that greets visitors to the newly installed Beat Nation wing of the Musée d’art contemporain de Montréal, resonating through each chamber of the monster collection of contemporary indigenous art. The show, which opened this week, explores the intersections between Aboriginal cultures, hip hop, politics and art, hijacking symbols from skateboard, bike, hip hop and graffiti scenes to claim new spaces for native culture.

“I think our generation in general is really influenced by music culture, and so for us it seemed like a very natural way to look at a generation of artists through the filter of music and to see where we’d come out on the other side,” explains Kathleen Ritter, who co-curated the exhibition with Tania Willard. “In doing so, I think we looked at a range of the ways that Aboriginal artists are working today with popular culture in their work, and politics.”

The exhibition’s offerings are varied, but recurring elements like yellow, black, white and especially red details, line-form drawings and the space’s percussive soundtrack keep it cohesive. All of the art integrates a playful political dimension, harnessing the symbolism of street and youth culture to keep these interventions witty, rather than preachy.

For example, Rolande Soulière’s massive displays of line-form styled caution tape and road signs toy with the markers of a long history of land appropriations, while Sonny Assu decorated 67 elk-hide drums with line forms and mounted 136 traditional bronze disks on two large walls, each iteration ticking off an anniversary of the Indian Act.

There is a strong presence of video art, including a striking mash-up of old movies with the seductive dance of local artist Kent Monkman’s drag character Miss Chief Eagle Testickle, plus several video installations by A Tribe Called Red’s Bear Witness, who remixes and splices pop culture films’ treatment of natives (references to scalping and “savages” abound), setting them to a thumping “pow-wow step” soundtrack.

Miner’s approach is representative of the show’s ethos, grounded in socially engaged art practices that help to heal the rifts within North American indigenous communities, rather than just making a political point.

“Hip hop has become this language for oppressed, for marginalized and for youth cultures globally,” he says. “You see it mapped onto native cultures, both urban and within reserve communities.”

The lowriders were created in collaboration with Aboriginal youth, part of an on-going project called Anishinaabensag Biimskowebshkigewag, or Native Youth Ride Bikes, and each bike represents one of the cardinal directions, decorated in black, white, yellow or red.

While the final pieces are themselves striking, Miner reveals that they are ultimately the outcome of this broader project, reaching out to Ojibwe and Anishinaabe youth in his home base in Lansing, MI. The city has a sizable body of Aboriginal elders, who migrated down from Manitoulin Island for jobs in the auto industry during Ford’s glory days, and Miner hoped to harness street culture to get kids interested in talking to their elders, to pass on Ojibwe language and traditions.

“It was really a space once a week for us to get together and share these stories,” he says, “to share knowledge and to bring connections between the youth and the elders and to begin to come to the conversation and the space that the youth were already into. Of course native youth are already into skateboarding, already into hip hop, into lowrider culture anyway, so that was the entry.

“With lowrider cars and lowrider bikes, the idea is to look fresh and to move slowly — to move through space slowly and almost to reclaim space. There’s a way that, in these bikes, you’re consciously indigenous and kind of exerting yourself in those indigenous spaces as a form of reclaiming that space. So the bikes became a way to think about migration stories, to think about space, to think about sustainable transportation, to think about healthy lifestyles, all of these things, to think about interactions between youth and elders, across generations somewhere in the middle.”

The ongoing (and increasingly violent) Mi’kmaq shale protests on the East Coast point to the desperate need for Canadians to think seriously about our long post-colonial history of shitty dealings with the continent’s indigenous people, and Beat Nation feels like a timely intervention in native cultures and languages that are quite literally fighting to stay alive.

“A show like this resonates in Vancouver in a particular way, and in Montreal it will resonate in a very different way with the audiences here,” Ritter says, pointing to how the exhibit connects in surprising ways with a lot of Quebec-specific politics around identity, community and language. “Issues around culture and autonomy are always present, they’re always important. It doesn’t matter what community they’re coming from. They’re problems that we always have to recognize.” ■