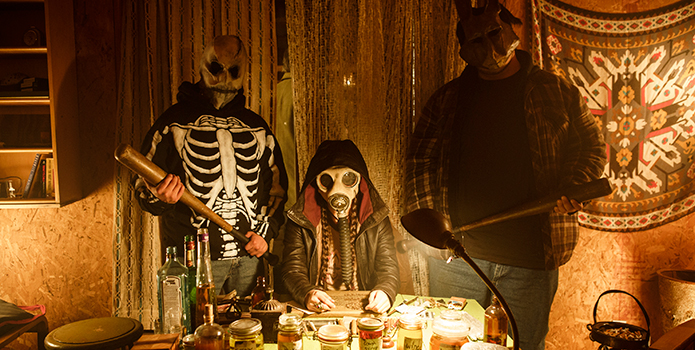 After several shorts, Montreal filmmaker Jeff Barnaby makes his feature debut with Rhymes for Young Ghouls, which has its local premiere at the Festival du nouveau cinéma after a successful screening at TIFF earlier this fall.

Set in 1976 on a reserve in Barnaby’s own Mi’kmaq culture, the film is a brave, powerful and harrowing drama. Devery Jacobs plays Aila, a teenage girl whose life is upended when her mother (Roseanne Supernault) commits suicide and her father (Glen Gould) is thrown in jail. When her father is released, she has to confront the difficulty of his reintegration, the villains of the local residential school and her own demons.

Confounding expectations in more ways than one, the film mixes supernatural thriller, heist flick and deep psychological and emotional drama. “I think it just happened naturally,” says Barnaby of this genre mash. “I’m pretty eclectic in my tastes in art, and I think that’s reflected in what I do. It’s indicative of the generation of filmmakers that are coming up now who’ve been exposed to everything. I’m pigeonholed as a horror director, even though I don’t really direct horror films. At the end of the day, they’re psychodramas. You have a ton of different elements ingrained within the story.”

Barnaby also presents native culture in a different light than a mainstream (i.e. white) audience is accustomed to seeing. The characters are connected to the land and their traditions, but they also drink, smoke, swear, fight and call each other “dumb Indians” and “red trash.” Barnaby’s producers at local shop Prospector Films call his work “a stark and scathing portrait of post-colonial aboriginal life,” but the director doesn’t see it quite that way.

“It’s not harsh — it’s just reality,” he explains. “I didn’t mean to be reactionary or subversive or anything. It’s not something that I set out to do. It’s just my background and what I grew up seeing and experiencing. It just struck me that there wasn’t that kind of realism in portraying native characters on screen before. It’s actually one of the reasons I got into filmmaking. I’ve spent a lot of time on reserves, and I don’t see those kind of Indians on screen. Which is weird, because they’re so much more interesting than the kind of idiots they do show on screen.”

While he doesn’t want to dwell on stereotypes and false perceptions of First Nations (“we’ll be here all day,” he laughs), Barnaby also wanted to make a film specifically about Mi’kmaq culture. “One of the things you see too is this kind of pan-Indianism, where all natives are lumped into the same culture. My wife is Navajo and I’m Mi’kmaq, and it’s like comparing apples and asteroids,” he says. To that end, the actors were all coached in a specific Mi’kmaq dialect, as well as the proper corresponding accent in English.

Jacobs and Gould both give powerful performances, with Jacobs carrying the film on her young shoulders. “You wouldn’t believe that we had to fight to get her in there,” says Barnaby. “I had to film a short and show it to backers in order to get approval. They said she didn’t have enough experience. Well, maybe not standing in front of a camera, but she has experience being an Indian on a reserve, which is what I wanted. I’m not typically one to dig my heels in, but that was one heel I was gonna die on,” he laughs.

RESIDENTIAL EVIL
With the continuing real-life revelations about the horrors of the residential school system, the film’s themes are timely, with a lot of the drama centred on what Barnaby calls “this kind of intergenerational fucked-upedness.” One of the most memorable moments is Jacobs’s poetic but chilling line: “This is what brings my people together — the art of forgetfulness.”

“There’s this philosophy out there towards native people which is ‘stop whining,’” Barnaby says. “A lot of the time people are pretty polite about it, but if you look at the CBC comments on any story about native people, you see the vitriol and the hate.

“I was kind of looking at [the residential schools] from an outsider’s perspective. I’ve never experienced it, but I experienced the runoff. None of us will ever really understand what these people went through, but the legacy is what spurred me on and what made me angry.”

The “art of forgetfulness,” he explains, refers to this legacy. “You feel this loss, this emptiness, this phantom limb. You’re trying to forget your history, and that’s not something you can really do. It becomes a lifelong ambition, almost the same as if you were learning an art form.”

But Rhymes for Young Ghouls isn’t a bummer or a guilt trip. While it contains and confronts these truths, it’s also a very cinematic and entertaining film. All told, it’s truly unlike anything Canadian film has ever seen. ■