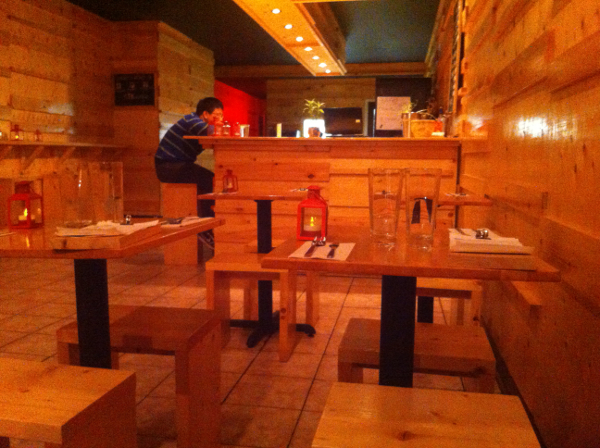 Tkrestobar should be packed. It has all the elements of the kind of restaurant anyone under 35 would want to eat at: classic rock blasting, handsome wood panelling, abundant alcohol and pretty much every food trend of the past five years. Momofuku-style pork buns? Check. Fried chicken? Check. Fusion-y tacos? Check. Ramen? Check. Ramen burger? Checkmate.

So why, on a Saturday night, were my dining companions and I the only customers at this restaurant that, by any logic of dining-out trends in 2013, should be filled to the max? The answer: location, location, location. Oh, and a refreshing lack of ostentatious marketing.

Tkrestobar is located on a strip of mostly mom-and-pop Filipino restaurants on Victoria, near Van Horne, in Côte-des-Neiges. The owner took over the space from his mother, who used to run a restaurant in it, and has given it a millennial twist, though holdovers from its past remain. A Western Union sign hangs near the windows (you get 15 per cent off food if you transfer money), you can buy lottery tickets at the cash, and there’s a $0.50 debit charge. But these things kind of make Tkrestobar better. I was prepared to disdain a place that had such an obviously trend-driven menu, but it’s genuine, not at all douche-y and, above all, the food is great.

Tkrestobar is kind of everywhere, cuisine wise, but it’s safe to say that most menu items are Asian-inspired, and many are wonderfully inventive. The offerings change weekly but included, when we were there, tacos with fillings like salmon tartare and crispy chicken, a $25 fried chicken bucket for two that came with rice and pickled vegetables, and the ramen burger (more on that later).

If you’re still feeling skeptical of the culinary trendiness, consider that the sincere owners really are trying to make the best rendition of popular foods that they can. They also have the distinction of not having much legitimate competition where many of these foodstuffs are concerned, the pork buns being a prime example.

David Chang’s take on the pork bun has spawned many imitators, and I liked Tkrestobar’s version more than the one at Big in Japan, which is the only other place I’ve seen it in Montreal. Slices of pork belly were wedged inside a split-open steamed bun and accompanied by coriander, peanuts, pickled cucumber and sauce.

We were tempted to order the chicken bucket but were promised that the chino wing appetizer came with the same sauce, and so we ordered those in the interest of saving stomach space. These were revelatory wings: super-crispy but not oily, piping hot and busting at the seams with umami-packed sweet chili and lime flavour. One of my eloquent dining companions summed up the consensus of our table thusly: “Fuck, I’d eat a bucket of these.”

We tried two items from the Filipino menu. Siopao, a Filipino version of the classic Chinese steamed bun, came with jerk chicken, Peking duck and pork adobo fillings, but only the pork was still available. Though it was sweet, fatty and highly enjoyable, I preferred the more varied textures of the other pork buns. We also tried the pork binagoongan, pork belly cooked in shrimp paste that was more subtle than we had hoped, though it was still a satisfying traditional dish.

Then came the infamous ramen burger. A long, long time ago, in August 2013, a Japanese-American chef in New York sandwiched a burger between two pan-seared slabs of ramen noodles. The result was pretty much what you’d expect in this post-cronut world. We initially came to Tkrestobar to try this novelty item, and left with mixed feelings. The ramen bun was a bit soggy, fell apart easily and didn’t seem particularly worthy of what was inside it: a very tasty patty marinated in a sweet soy-based sauce, with fermented vegetables and scallions. Still, it’s worth trying, if only so you can move on to the latest food craze (we hear the cronut inventor has come up with a new pastry).

A restaurant like this that is so of-the-moment, and also just plain good, deserves to succeed, and any foodie jonesing for the latest food trend ought to hoof it to Côte-des-Neiges to give it a try. Asian fusion has a bad rep, but Tkrestobar gives it a good name. ■