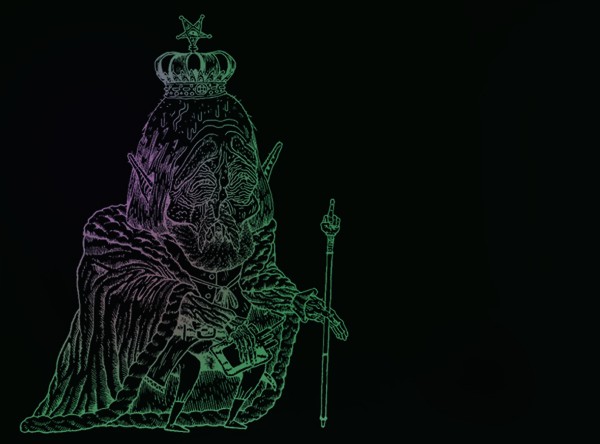 From The Baphomet Club, by Telsa.

The Baphomet Club, a series of prints on display this month at Greenlight Gallery, smuggles the imagery of occult mysticism into contemporary underground art. The show’s title refers to the shadowy deity Baphomet, venerated by the medieval secret order of the Knights Templar and later worshipped by Satanists. The symbols it draws from are ancient, providing a stark contrast to the works’ executor, Telsa — aka Sacha Pérez del Solar, a 16-year-old high school student from Repentigny.

The exhibit is populated by a pantheon of demons and gremlins, hijacking the fusion of holy and horrific iconography used by artists of evil from Hieronymus Bosch to French occultist Eliphas Lévi. But Pérez del Solar renders his characters in the shaggy line work favoured by underground comics and rock ’n’ roll show posters, eschewing shading in favour of a sketchy cross-hatch and outfitting his critters in nasty Y-fronts, tattered capes and regal crowns.

“I’ve always been drawn to monsters, figures that are dark, even a bit Satanic. My work revolves around that,” Pérez del Solar explains over the phone, in French. He also cites Charles Burns’ classic dystopian graphic novel The Black Hole as a key influence.

“I don’t know precisely how I fell upon Baphomet. I was searching through books that were a bit sinister, and I was looking at a lot at Satanist mythology. I stumbled upon Baphomet, who I’d never really heard of before. But I liked the name, and I liked the goat image that’s often associated with witchcraft.

“Baphomet is also a deity that watched over the Crusaders,” he continues, “which isn’t really the idea I want to keep. I prefer the image of the prophet of Satan, created by witches at the Sabbath. The witches would meet in the night, in the forest, to worship.”

For such a young artist, Telsa’s style and content are remarkably confident, executed first using a quill and India ink on paper, then scanned. After, he digitally manipulates the images, backlighting his line work with hallucinogen-palette pastel ombré fills before finalizing each 13×19-inch print.

“He had enough pieces,” says Pérez del Solar, Sr. with an audible shrug, when asked what led him to help his son exhibit so early. “This is actually his second show. He did one last April at Cinéma du Parc, but there are some new images for this one.”

For Telsa (the moniker’s a semi-anagram of his given name), developing his craft early only makes sense. He says, “Drawing’s been my passion ever since I can remember.” ■