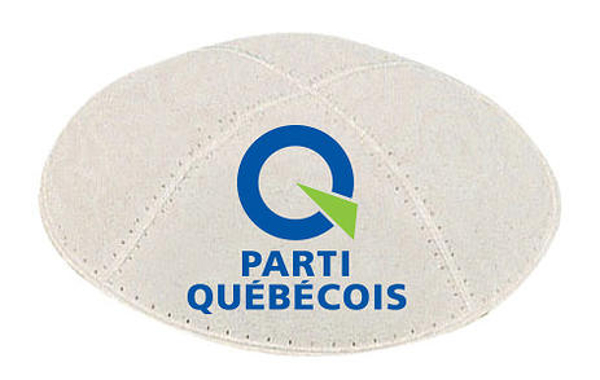 Would this kippah be acceptable attire at, say, a hospital?

Just in time for Yom Kippur, the Jewish day of atonement (and just after Rosh Hashanah, the Jewish New Year), the Parti Québécois announced plans for a Charter of Quebec Values that would forbid anyone who celebrates these holidays from wearing their kippah to work in publicly funded institutions. The rationale here, apparently, is that said charter would create a neutral state — one in which Quebecers would not have to worry about encountering someone wearing a kippa, hijab, turban or any other religious attire that may prove an affront to Quebec’s resolutely secular society.

To explain what you can and cannot wear, the PQ released this handy chart. Basically, what the government calls “ostentatious” religious symbols — large crosses, face- and head-covering clothes, etc. — would be verboten in hospitals, public schools and so on. Unless, of course, those institutions chose to opt out for a five-year period. But they would have to have a good reason for doing so. And, per Bernard Drainville, the man in charge of the contentious charter, daycare workers, elementary school teachers and early care providers wouldn’t have that luxury.

Naturally, the charter has its detractors, among them pretty much anyone who enjoys the freedom to wear religious garb to a public-sector job, much of Montreal (including its elected officials), political rivals (who expect the minority PQ government to call a snap election should things not go in its favour with the charter) and even a Bloc Québécois MP, Maria Mourani, who was expelled from the party’s caucus for denouncing the idea. (She then quit the party.) A protest about the whole thing is scheduled for tomorrow.

In the meantime, one Ontario hospital is using the proposed charter as an opportunity to recruit doctors and such, while an industrious Quebecer is taking advantage of the controversy to sell kippahs bearing the Parti Québécois’s branding. Any chance of a rush delivery for Kol Nidrei services tonight? ■