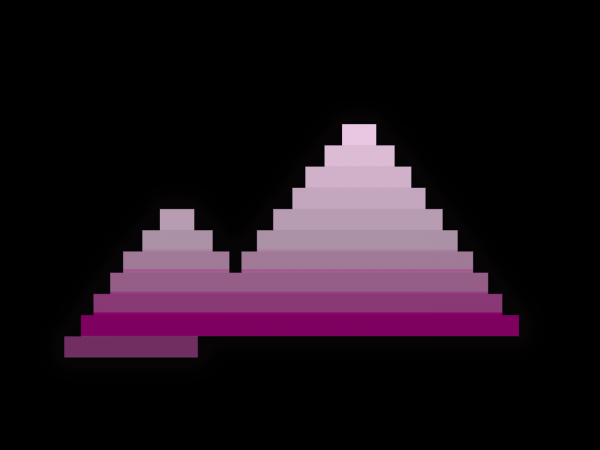 European blues may not be a real musical subgenre, yet it describes Chevalier Avant Garde to a tee nonetheless. The Montreal duo are one of the city’s best and brightest young acts, and their second full-length album, Resurrection Machine, is the equivalent of having a curtain of melancholy draped over your head.

Resurrection Machine is cryptic, built upon murky layers of both live and sequenced sounds. The synths are moody, the melodies are bittersweet and the vocals sound detached and ghostly. The two men who created the album, Dimitri and Filip, are a mysterious pair who, to seem more personable, don’t use their last names, and prefer to be represented visually in pyramid form. They’re trying as best as they can, in this info-obsessed culture, to retain a little bit of mystery with their project.

“I prefer being mysterious to anything else,” says Dimitri. “As a fan of music, even, I like it when there’s not too much information out there, or when it’s not being directly told to me. What we do is more about suggestion than dictation.”

The pair both came to Montreal from foreign lands in their teens — Dimitri from Greece, Filip from Poland — and although both countries don’t share much in common culturally, they’re both on Europe’s periphery. Dimitri says that growing up in Crete, he was as much exposed to Greek music as Eurovision cheese and MTV, and while it is possible to make out those influences in Resurrection Machine, he says they were likely included subconsciously.

“For this album, we really tried to stretch our sonic palette,” Dimitri says of Resurrection Machine, which was recorded at their home studio on the Plateau. “You get set on certain sounds, and then you move on for a while, but then you miss the earlier sounds and you go back to them. Before, we had a project called Postcards, and for this album, we revisited some of those acoustic sounds from that project.”

Although the band’s sound remains mostly electronic and wistful, how the duo perform the songs live has changed. “We try to bring as much equipment as possible, and we recreate the songs electronically,” Dimitri says. “We’ve gradually gone from doing things canned to playing more live, and it sounds much better now. Less compression.” ■