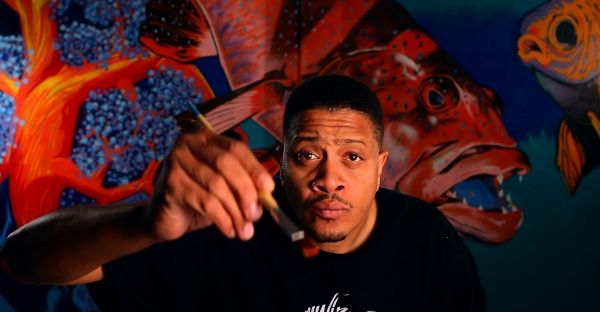 West Coast underground hip hop map-makers Jurassic 5 always held to their claim to “take four MCs and make ’em sound like one,” but it was hard to ignore the standout baritone of rapper Chali 2na.

With the bass in his voice second only, perhaps, to U.K. rap demigod (and occasional collaborator) Roots Manuva, talking to Chali 2na in person is eerily comparable to having the towering rapper jump right out through the speaker, guffaw and slap you on the back in welcome.

In town Friday for his first-ever solo appearance in Montreal, 2na is bringing along a three-piece to flesh out the sounds of his set of J5 hits, solo numbers from his LP and mixtapes, and classic verses from a little bit of everywhere — and his aesthetic doesn’t seem to stray too far from home.

“My band is a three-piece, but we make it sound like a 15-piece just because of the way we do it,” says the 40-something vocalist, whose distinctive rhyme schemes mix pop culture references, comic observation and stark reality with ease. “[We really] capture the sound of the record, but it feels live.”

Having recently reunited with his J5 family for the summer fest circuit, 2na has been making a name for himself in the Hollywood gallery scene, drawing on his graf-writing past but updating his style by experimenting with oil paints, inspired by the lasting works of the great masters.

“It’s hard to explain,” 2na says of his art career by phone, summing up his own identity nicely, if unwittingly, in an attempt to elaborate. “I try to make my work as realistically cartoonish as possible”

Darcy MacDonald: So we know you as a West Coast dude, but you’re from Chicago originally, correct?

Chali 2na: South Sider, that I am. I’m from the Chicago streets, and at this time I’m not necessarily proud of that [laughs].

DM: I guess it’s been rough watching the news this summer, huh?

2na: Man, it’s been so crazy. It feels bad just to be connected to that type of violence and know, in essence, where it comes from. I’ve seen some things that I probably shouldn’t have seen, as a youngster. Just to hear about what’s going on in the Chi now, it feels like that shit all over again.

DM: Was that what made you move to the West Coast, or was it the music business?

2na: No, you’re right, it was because of demons, I wanted to work on some demons. To be perfectly honest, my family was connected to a lotta craziness and a lotta shit was goin’ on at the same time, and I just had the opportunity to be out. My grandmother was like, “I’m going to California. You wanna go? I’m gonna take your brother and sisters with me.” It’s like I say in this lyric, it was either “play the corner with a vest and a Glock/or leave for California with the rest of my flock.” I chose the flock.

2na: It’s actually what got me into the whole hip hop scene: to be the best graffiti artist that I could possibly be. I had a little fame in Chicago and a lot more in Los Angeles in the late ’80s and early ’90s as a graf writer. But that thrust me into an atmosphere that provided opportunities to be this dude that I am today.

This dude that I knew who had moved to Chicago from the Bronx (in the early ’80s) was kinda braggadocio about how it was where he was from: how nobody else in the world was doin’ it like this in graffiti, and talkin’ about these gangs that had done fought, but they was dancers. It was crazy, man. And I just eventually watched hip hop develop, and I was eager to be a part of it, being someone from South Side Chicago that really was a house head.

For me,  because graf writing was so anonymous for so many years, it wasn’t about letting anyone know that I did this so much as needing to get these messages and these pieces of artwork out. Now, as an older guy, I started thinking to myself I would love for people to know exactly a little bit of everything I do.

DM: Tell me about playing solo with a live band as compared to with Jurassic 5.

2na: I adapted the live band aspect as a solo artist simply because I felt that as a part of Jurassic 5, I was a part of a clique that embodied hip hop to the max, with two DJs who are two of the best in the world, in my opinion. I just felt like I couldn’t match that sound, or at least take your mind away from the fact that I am one of those dudes.

With the solo stuff, I wanted to find my own dynamic, and since I wasn’t a stranger to live-band playing, being a founding member of Ozomatli, I learned over the years how to project over live instruments that weren’t records — how to breathe, how to hold a mic, all these different little etiquettes.

So I wanted to bring it to my solo performance just to make it slightly different than what you’re used to hearing. I want people to know me for more than just the “verbal Herman Munster!” ■