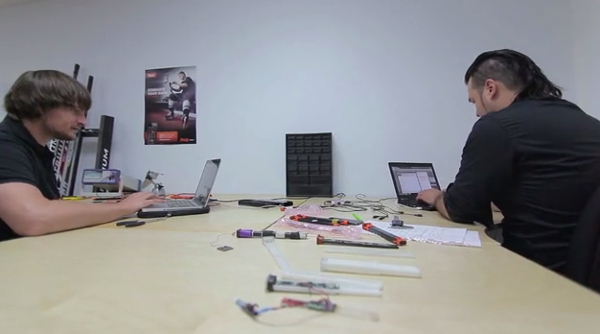 Hard at work on the Powershot

Kickstarter, the website that allows anyone to crowdfund the crazy project of their dreams, has been open to Canadian entrepreneurs since Sept. 9 (although it was possible to skirt the rules before, with an American go-between). So now that two weeks have passed since the launch, a few interesting locally based Kickstarters have surfaced, including a stylish squeegee able to “zap birdie poo,” a massive, rotating BBQ, gaming stuff and a couple of hockey-based products. Basically, exactly the kinds of ideas you’d expect from Montrealers.

So have we, as a city, mastered the art of Internet panhandling yet? Check out these Kickstarters currently awaiting their fates (Kickstarter funding is an all-or-nothing affair, meaning you either reach your goal or you get zilch) and be the judge.

The Powershot
Goal: $75,000
Attach this feather-light doohickey to the shaft of your hockey stick, and you’ll be able to measure how fast and hard you shoot. Are you the next Al Iafrate, or just another limp-wristed punk?

Squee-Kee-Kleen
Goal: $8,500
We’ve all had our encounters with squeegee kids around town who ask for a buck or two in exchange for a quick windshield clean, but have you ever met one who wanted over eight grand? This person has created a new squeegee (with a moniker that has nearly too many Ks) that promises to turn the cleaning game on its head. Sort of like when squeegee kids upgraded from crumpled-up newspapers.

The Canada Grill
Goal: $25,000
Canadian Tire’s know-it-all, bearded pitchman may be long gone, but as I was watching the video of foodstuffs gently rotating in this mammoth, custom-made rotisserie, I couldn’t help but imagine hearing his smug voice delightfully rifle off the device’s litany of features. Then again, the creators of the Canada Grill also refer to the inherent dangers and toxic fumes that come from BBQing as if they’re bad things.

The Big Embrace
Goal: $1,000
Local multidisciplinary artist Steve Giasson wants to give you a hug. If you drop a buck or more into his virtual bucket, he’ll give you one at an event in November 2014. Personally, I like to dole hugs out free of charge. ■