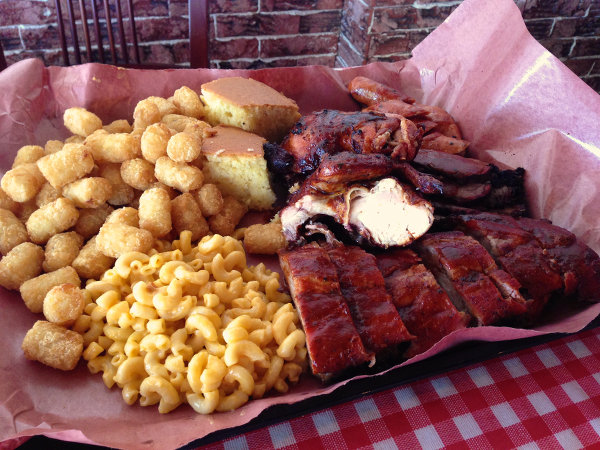 What you’ll find at Moonshine BBQ, which opened this summer

For many Montrealers — well, for those who identify as foodies, at least — this summer was something of a landmark. For the first time in many, many decades, food trucks were once again free to peddle their wares on the city’s streets. New restaurants, many of them serving heavily blogged-about dishes, continued to open their doors. And, as we are wont to do, we took pride in our burg’s food culture, tweeting and tumbling its many merits to the world.

It seemed we had finally caught up to the rest of North America. Or had we? Yes, Montreal has contributed its fair share to the post-2000s food culture (poutine, foie-gras everything), but it’s generally slow on the uptake with trends from elsewhere. Now that summer’s a wrap, we decided to take stock of where we stand in the all-important scheme of the food craze.

CRONUTS
We have New York City pastry chef Dominique Ansel to thank for the croissant-donut hybrid that is the cronut. His bakery trademarked the word in May, when demand for the apparently life-changing confection grew so great that a single cronut could fetch something like $100 on Craigslist. Last summer, the fabled pastry materialized in Montreal, first prepared by Saint Donut and then more permanently at la Cornetteria, a bakery on St-Laurent, under a new, non-trademarking-infringing name: the Cronetto. Reviews seemed largely favourable, though by the time the cronut was available locally, many of us had lost interest in it altogether.

FOOD TRUCKS
Food trucks — and street food in general — have been staples in other cities since time immemorial. Montreal, however, had deemed them illegal due to health concerns. But when the Grumman ‘78-mobile began serving tacos at festivals a couple of years ago, our collective curiosity was once again piqued: What if we, like the rest of the world, could buy food on our streets? This summer, that crazy notion came to be, but with a few caveats, chief among them that said trucks had to be approved by some sort of board and could only sell food in designated areas, which meant they weren’t a food court alternative for those of us who dwell in Cubicle Country, aka downtown. Still, while we may be behind the curve and subject to outmoded rules, the trucks offered solid eats, our favourites being the mac ‘n’ cheese from le Cheese and the oysters from Pas d’cochon dans mon salon.

BBQ
The BBQ trend is nothing new, even in Montreal, so it’s tough to pinpoint how far ahead of us other cities were. And, at this point, it’s moot. What we can say is that BBQ places continue to emerge, with restaurants like Verdun’s highly touted Blackstrap BBQ and Mile Ex’s trendy Dinette Triple Crown — which seemingly reminded people that picnics arefun — opening their doors. We’ve heard good things about Blackstrap, and we frequented Triple Crown throughout the warm months, though the biggest starch-monger among us gives the thumbs-down to the latter’s mac ‘n’ cheese.

RAMEN
We can thank David Chang for starting this trend in North America. Around 2008, ignorant eaters suddenly became aware that ramen didn’t always come in $1 packages. In fact, we learned, the real thing was a delicious  Japanese soup that was porky, fatty and immensely satisfying. But it’s been slow to materialize here — perhaps because of Montreal’s woefully small Japanese population — but the times they are a-changin’. The first restaurants to advertise ramen here were not run by Japanese chefs and rarely produced versions that even bore a passing resemblance to the real thing, but now you can taste hard-to-find tonkotsu ramen at Ramen-Ya and truly authentic versions at Kazu and Misoya downtown.

GOURMET BURGERS
Gourmet burgers rose to popularity a few years ago. Suddenly, a hamburger from a fast-food chain would no longer suffice. Instead, we craved all manner of high-end options, ranging from those made of Kobe beef to versions boasting, say, Korean-style toppings. And though we are fast approaching burger saturation, judging by the number of new contenders (and the fact that we have a whole week devoted to burgers), we’re not quite there yet. The more pressing question, though: Have we gotten this right? Truth be told, as exacting as we may think a so-called gourmet burger’s standards are, it’s hard to fuck one of these things up.