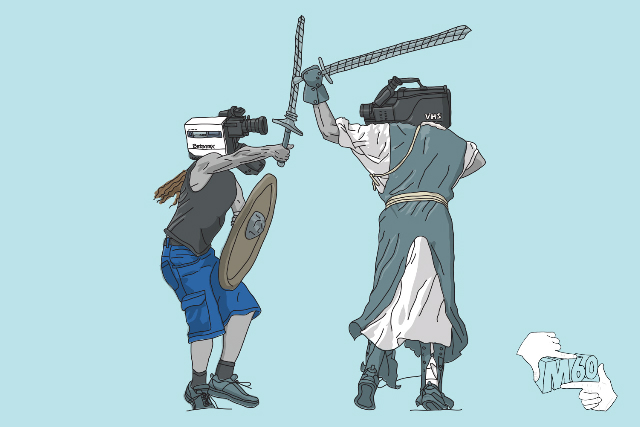 Once a year, M60: The Montreal 60 Second Film Festival asks Montrealers to dig out their cameras to create their own 60-second films surrounding one theme.

“The original idea was to make a festival that combined the accessibility of the YouTube era with the real human experience of going to the movies and watching the big screen in a room full of humans,” says Toby Harper, one of M60’s founding organizers. “There’s a new theme each year, but otherwise people come to the launch and sign up in person to make a movie, upload it a month later, and then it gets screened with all the others in September.”

Since the festival began, any major changes that have come about are due to advancements in technology, vs. the actual structure of the fest. Says Harper, “Things that have evolved since we started include the technologies: specifically, “SLR cameras that shoot hi-def video and more powerful home computers for editing that non-professionals are using to make slicker-looking videos,” Harper says.

“And it isn’t a night at Sala Rossa watching our friends’ and families’ submissions anymore. It’s four nights at Excentris watching submissions by hundreds of people from across the city who have been motivated by the festival,” says Harper.

Having been a part of the fest since the very beginning, Harper is still amazed by some of the submissions they receive. “One thing that surprises us every time is the diversity of interpretations of the theme, but also some random similarities between the submissions.

“If you’ve never been to the festival and you come to one of the upcoming screening nights, you are definitely going to see a few people underpaying their cats as acting talent. You’re also going to see blood-splattered slasher films and headier come-uppance plots, masked avengers and several bananas. The screenings are a great time, like going to movies but you get to sit next to the creators while you’re watching, then hobnob in the lob with them afterwards—it’s pretty much Cannes,” says Harper.

The most important aspect of the festival is that there are no submission fees, no jury and therefore no prizes. It is a festival that simply exists to explore the talent and breadth of creativity that the filmmakers, established or not, in the city have. “We screen everything we receive that isn’t likely to get us sued,” says Harper. This year we made a reel of some of our personal favourites [from the five previous] M60 editions and it was fun to see what we chose.

“My personal favourites are films by first-time folks who have a specific vision that really comes out in the final product, whether cleanly executed or not. It’s also fun to see those same folks try different things in subsequent years, with more or less success. Maybe there’s 60 seconds of cinematographic brilliance in each of us. Maybe not a second more.”

We asked some of this year’s M60 participants about their experience creating 60-second revenge films.

Mark Slutsky, It’s the Drowned Guy
Have your participated in M60 before?
Yes, at least twice, and possibly three times. No, definitely three times.
Are you a filmmaker?
Yes.
What was the experience like for you this year?
This year was wicked fun. We—myself and my co-filmmaker Karen Messer—were at my parents’ place in the country and decided to take advantage of the rural setting to make a mini horror movie. The idea came to us of a couple of blasé cottage-goers who brush off a sad ghoul looking to avenge his death.
Why participate in M60?
As a filmmaker, I feel lucky if I get to be on set a couple of days a year. M60 is a great way to just get out there and make something and exercise those creative muscles without the complexities of a big production apparatus or, like, a budget, to weigh you down. And I love working with creative restrictions like the 60-second length of the film and the theme.

Daniel Mireault, Vengeance
Have your participated in M60 before?
Yes, I’ve participated to M60—last year for the first time, and we had blast.
Are you a filmmaker?
I would very much like to be, but I’m not. I’m currently an interface and interaction designer. I’m a cinephile and film enthusiast. I’ve done a few personal film projects, and I did art direction on a few TV ads and corporate videos when I worked as a creative director for local ad agencies.
What was the experience like for you this year?
This year’s theme was ideal for us to do a sequel to last year’s film. We brainstormed over a few glasses of rosé and found our idea within an hour. Coming up with the idea was the easy part. Shooting was the hard part. We had the worst conditions ever. It was cold, rainy and windy. The wind blew our lighting rig away and our DOP almost broke his leg trying to catch it.
Why participate in M60?
It’s fun! In my opinion, constraints are the key to creativity. Being forced to tell a compelling story in 60 seconds is a great challenge. We like a challenge, although we could have done without the 30-kilometre-per-hour winds.

James Kerr, It’s a Fact
Have your participated in M60 before?
This is my third M60.
Are you a filmmaker?
I’m not a filmmaker, but I do have experience making animated GIFs, which I post on my tumblr.
What was the experience like for you this year?
This was the first year I went at it solo. I really wanted to test myself and try to make a short animated movie.
Why participate in M60?
I think M60 is great! And will always try to participate in it—when I can. I can’t wait to see what people come up with. ■